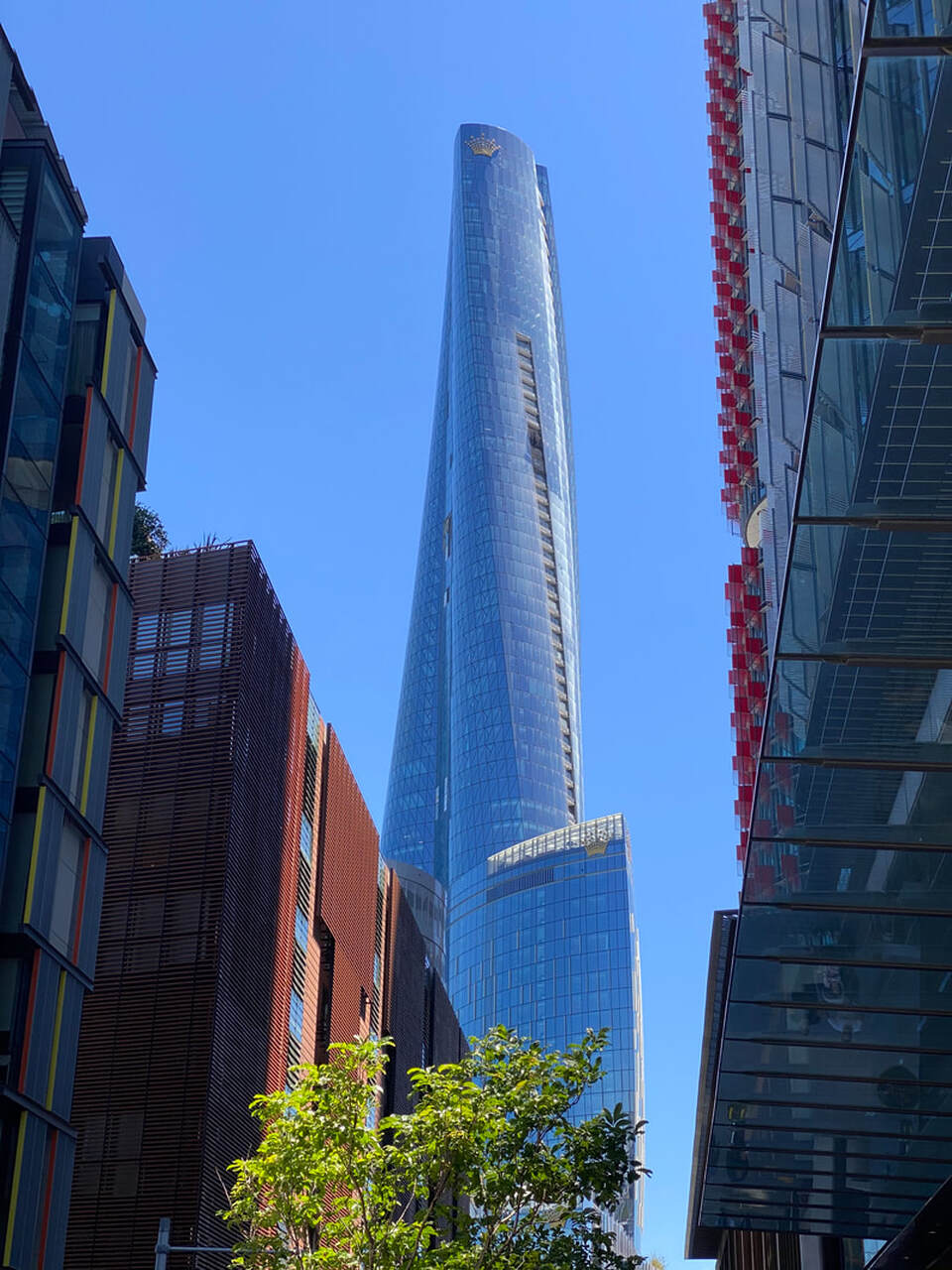 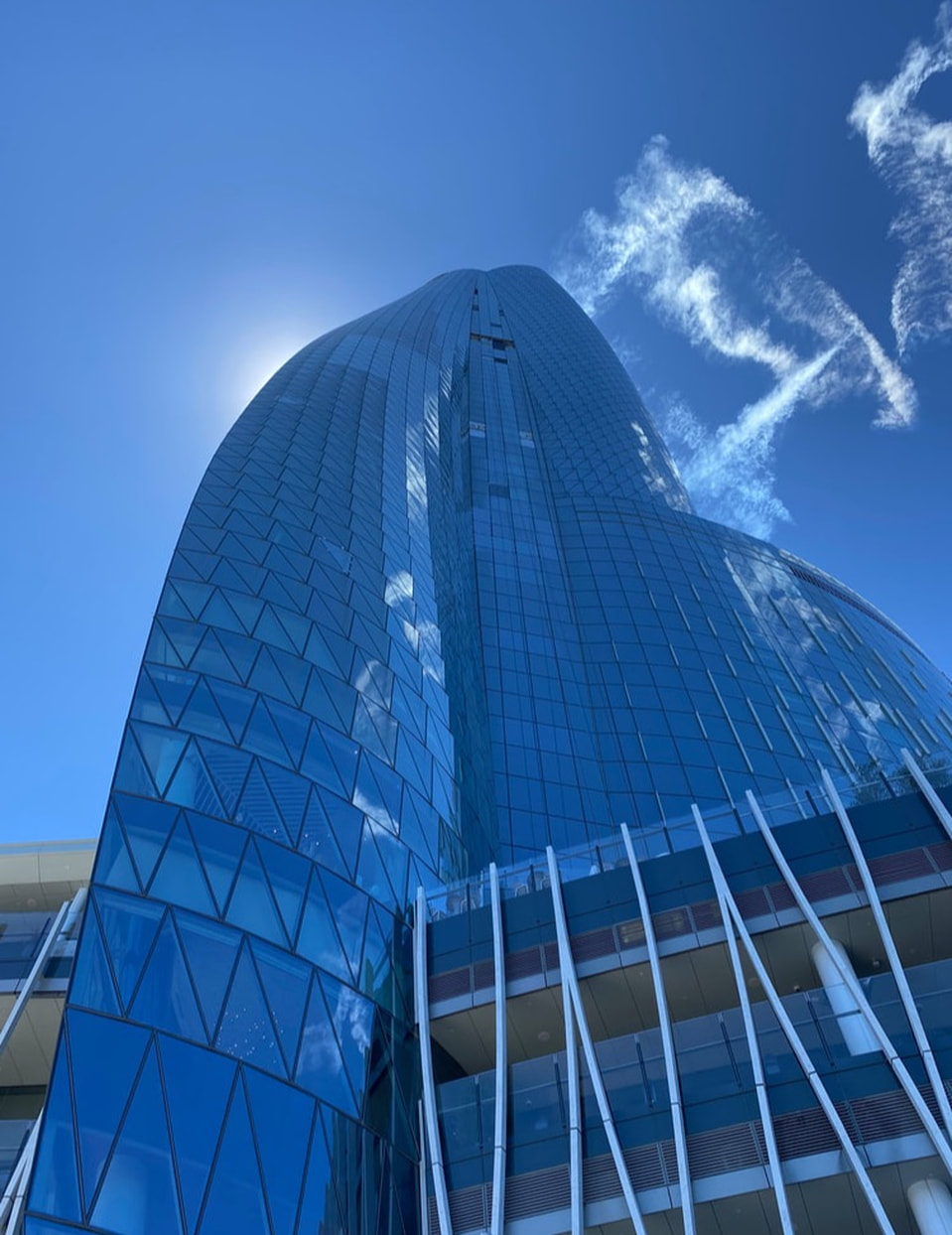 Crown Sydney is the first 6 star hotel in Sydney and no money has been spared to make it the new destination in the relatively new suburb of Barangaroo which opened in December 2020, amid the incertitude of the pandemic.
The building itself is the tallest in Sydney and a beautiful sculpture on the edge of Darling Harbour.
There are many restaurants inside and we will review a number of them over time, but today we managed to find a table for dinner, and at the counter of the Ash Kitchen at Woodcut, one of four in the restaurant, and one of the top venues at Crown.
Designed by my friend Rod Faucheux of Loop Creative fame, the kitchen is run by duo Ross and Sunny Lusted who know a thing or two about hospitality, as their previous venture The Bridge Room in the CBD ran successfully for 8 years. They both had creative input in the design of the magnificent decor, and like their menu, a fusion of Japanese and Modern Australian cuisine. Ross stopped by for a chat while we were waiting for our meal to be prepared in front of our mesmerised eyes glued to the action in the kitchen and at the pass, as my guest and I were seated to the right of it. 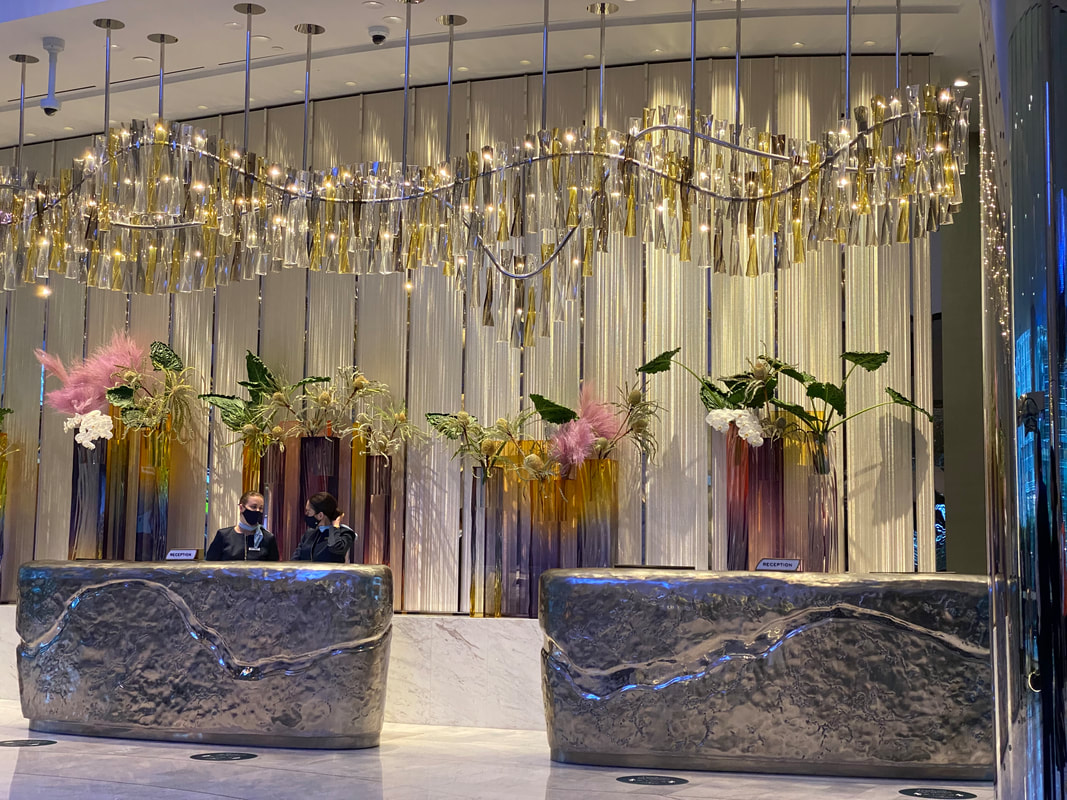 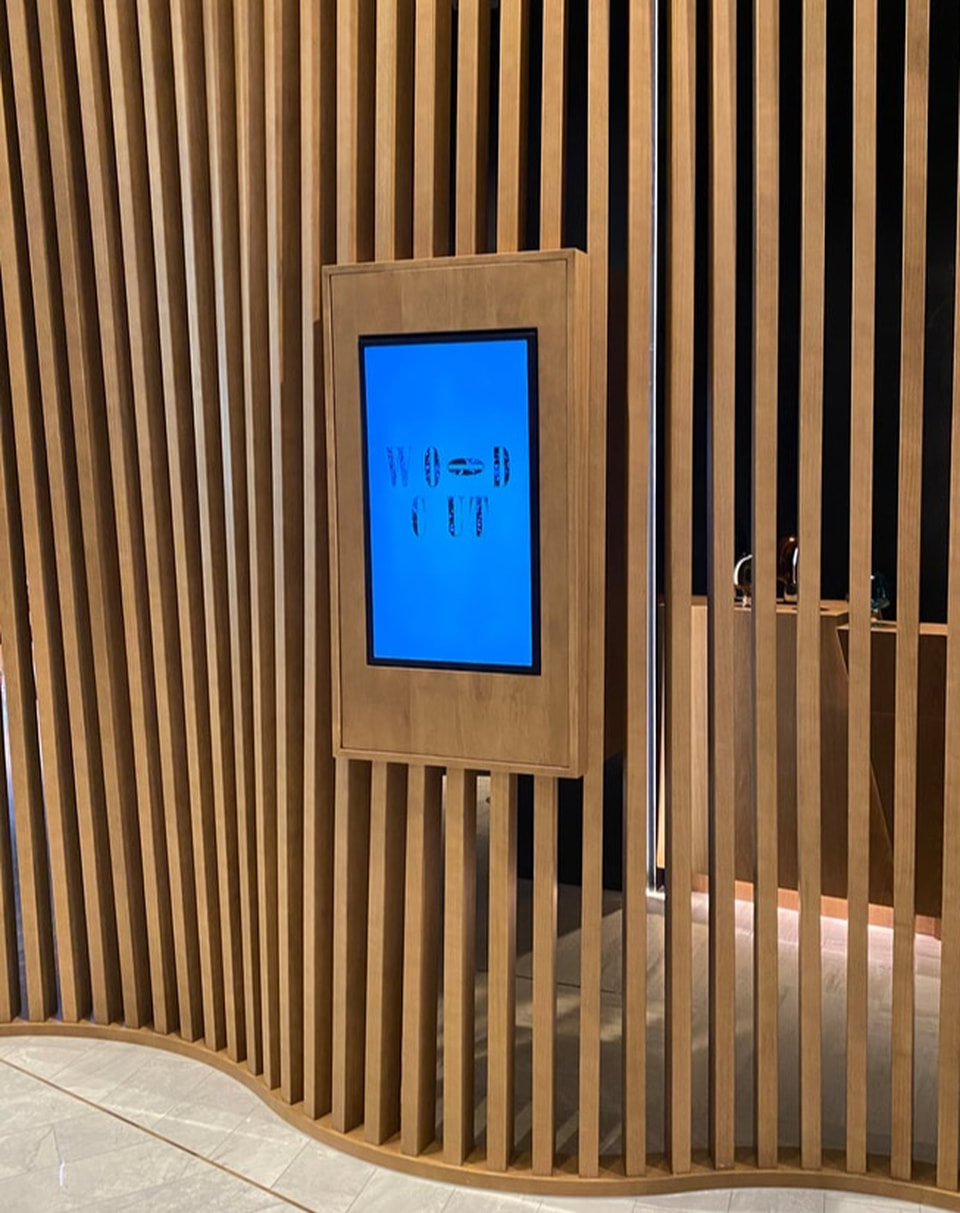 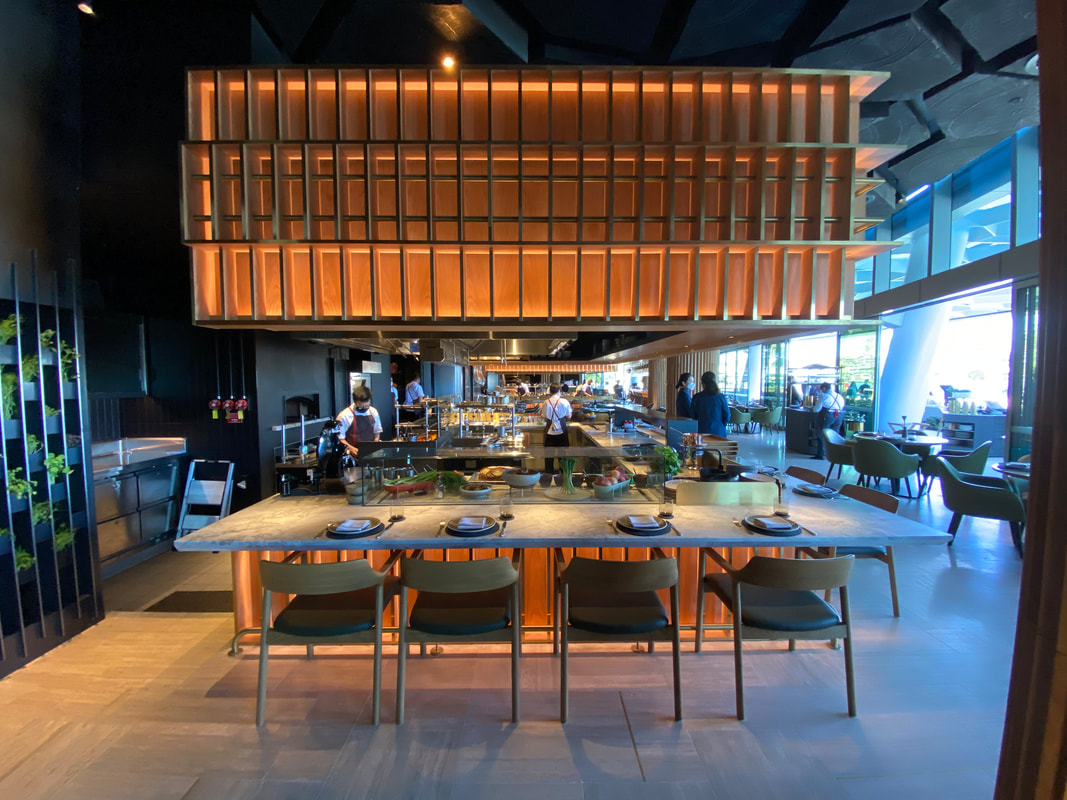 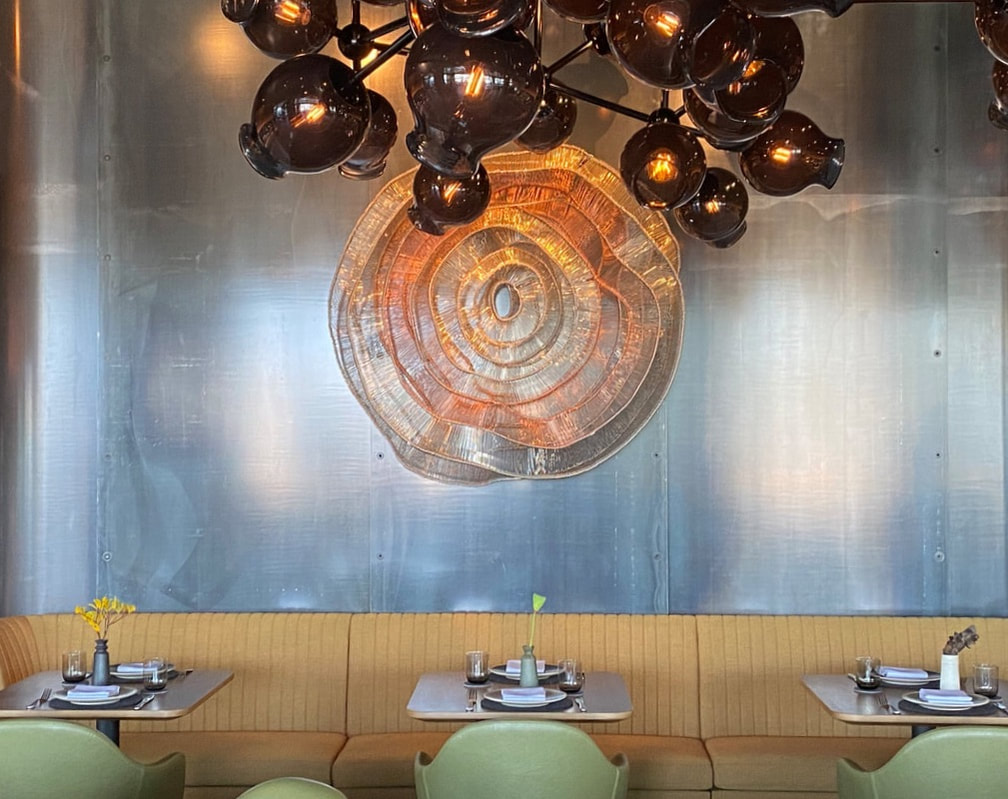 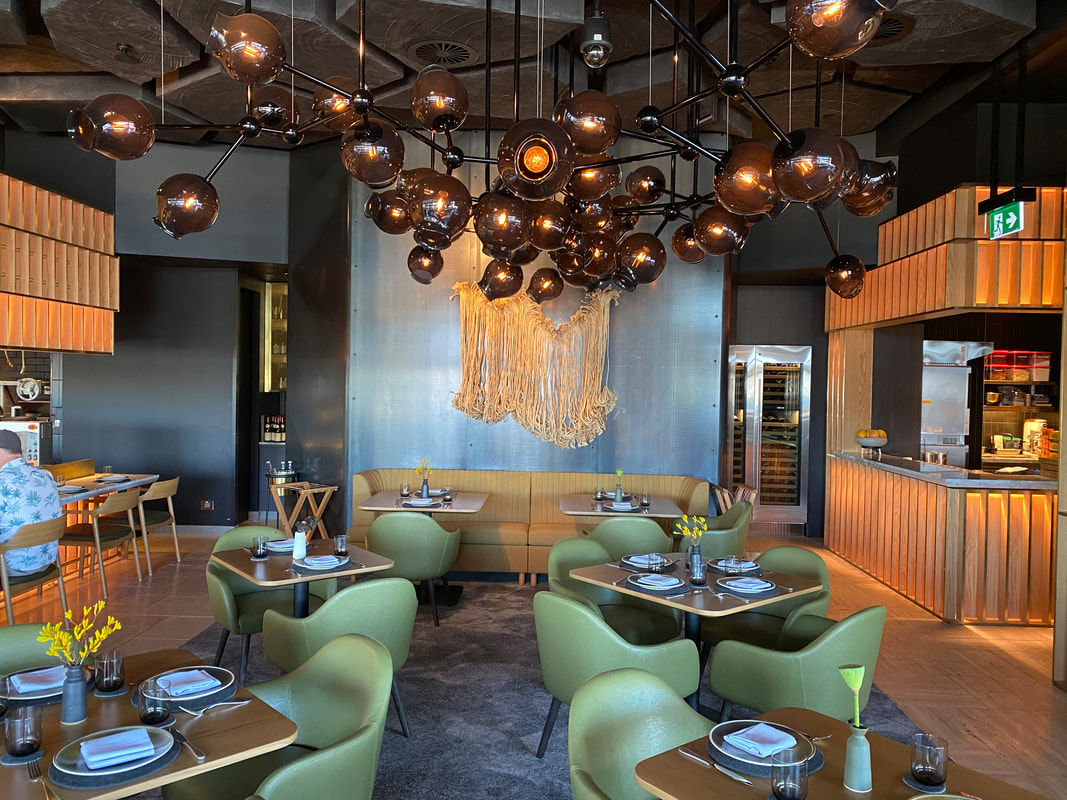 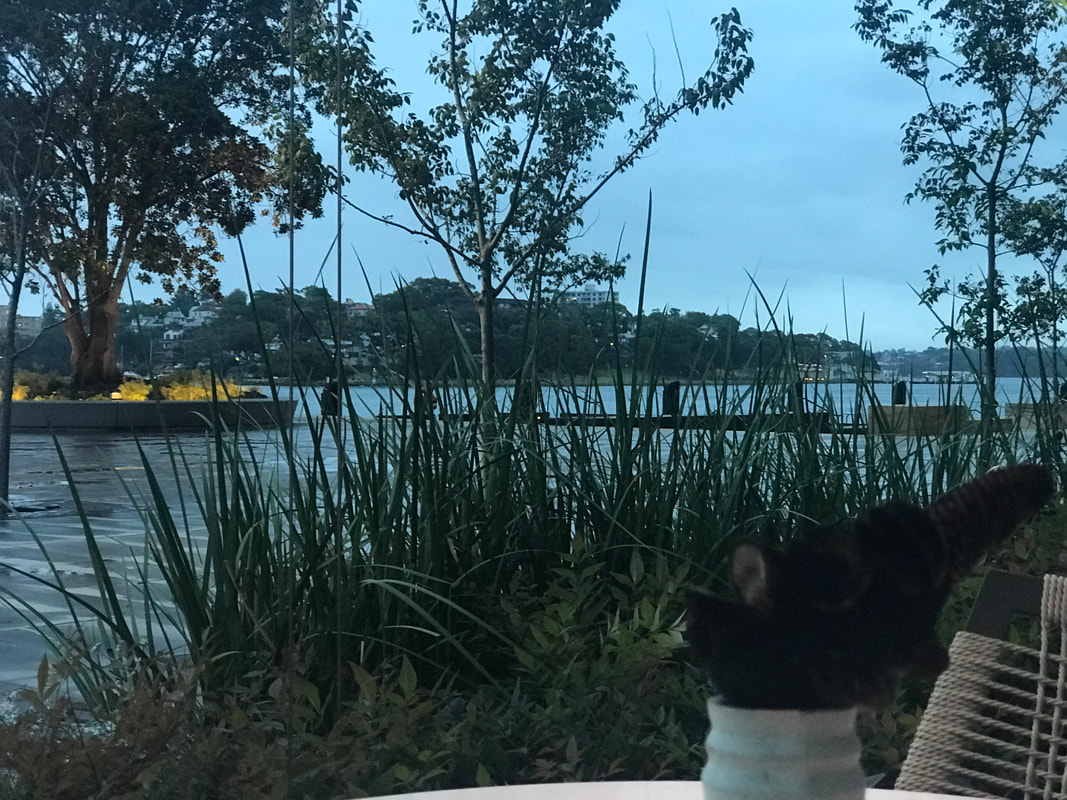 The terrace overlooking Darling Harbour and the Waterfront Promenade

The kitchens and the food

Let me quote the restaurant website to start with:
”Lusted’s culinary creations often stem from sketches he conceptualises on paper. It is these visual cues that inspire the dishes that take centre stage on Woodcut’s daily changing menu. He is known for his deeply considered approach to the creative process and his commitment to heightening every layer of the guest experience. At Woodcut, dishes will be prepared in wood and charcoal grills, wood ovens and steam kettles. The earthy and sensory cooking methods impart a tangible element of flavour and authenticity to the cooking process. “Every person I know has experienced throughout their life and perhaps their travels, memories that are triggered by the experience of eating food cooked over fire. This rustic and traditional cooking source is so deeply satisfying and good for the soul… I have always been drawn back to this way of eating”.

At the heart and soul of Woodcut is fire, steam, smoke and ice. These are the four kitchens which are also the backbone of the design and layout of the restaurant.
Beautiful ingredients, simply cooked. These earthy and sensory cooking methods impart a tangible element of flavour and authenticity to the cooking process.

​So come and join my guest and I through one of the most amazing culinary experience of my life...
Photos were taken by both us. 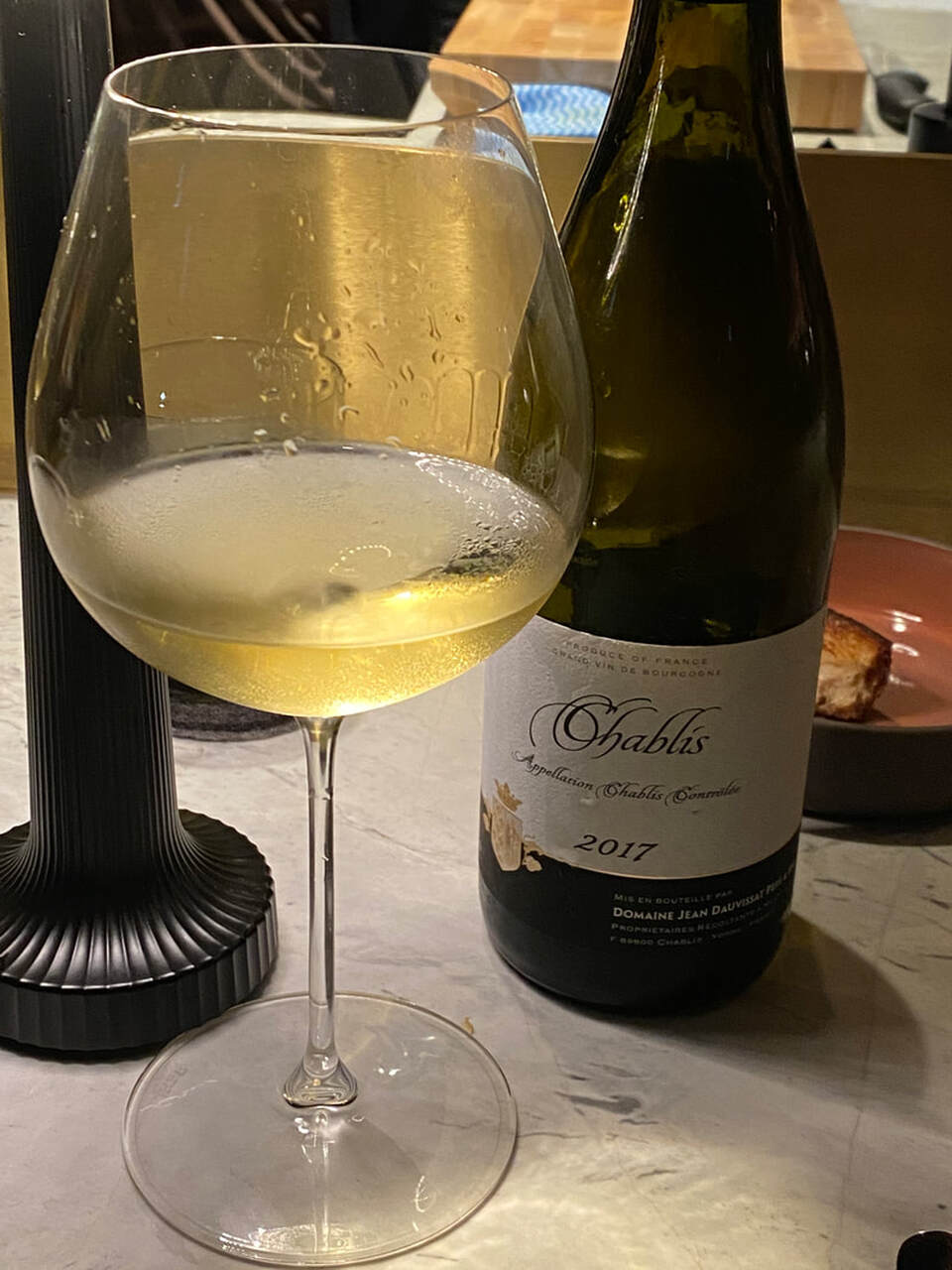 This Chablis is extraordinary and very well priced too. We had to have a second bottle... 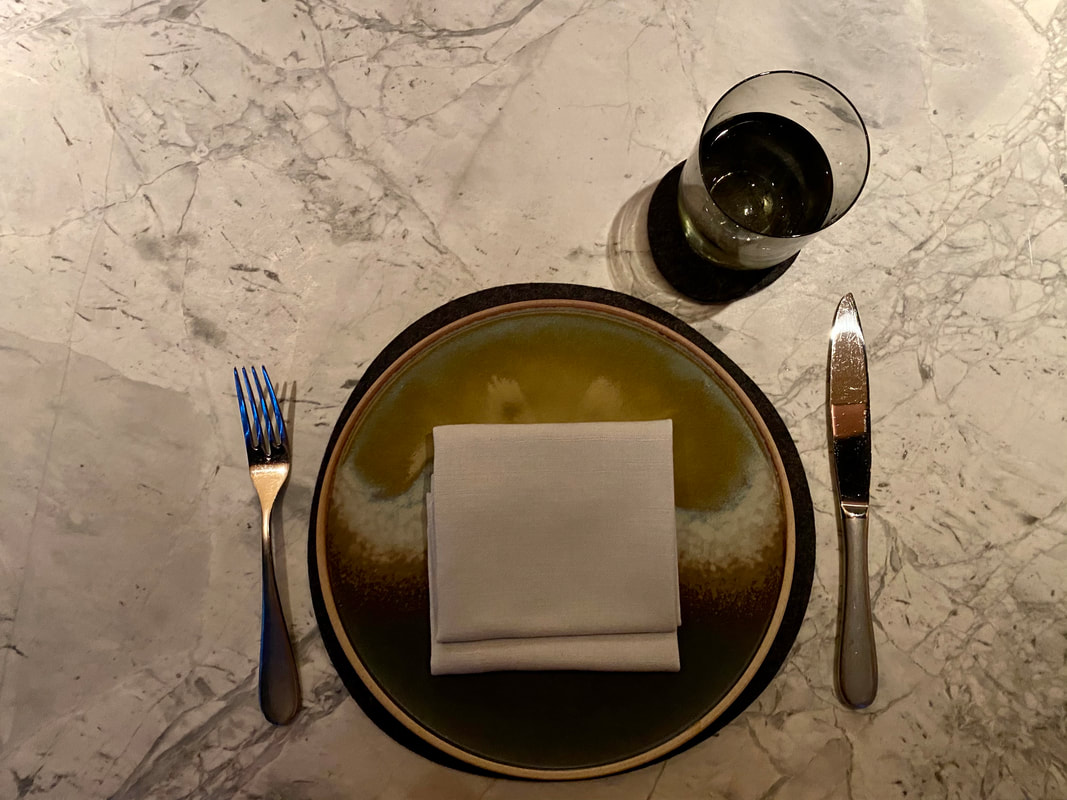 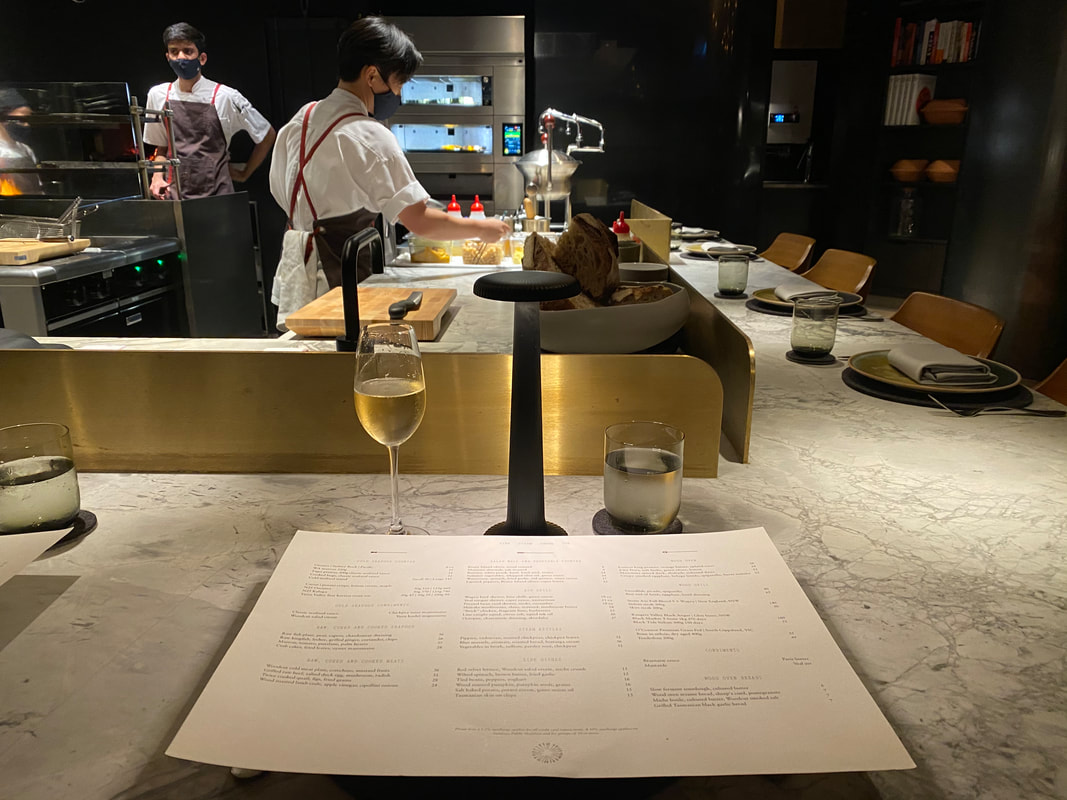 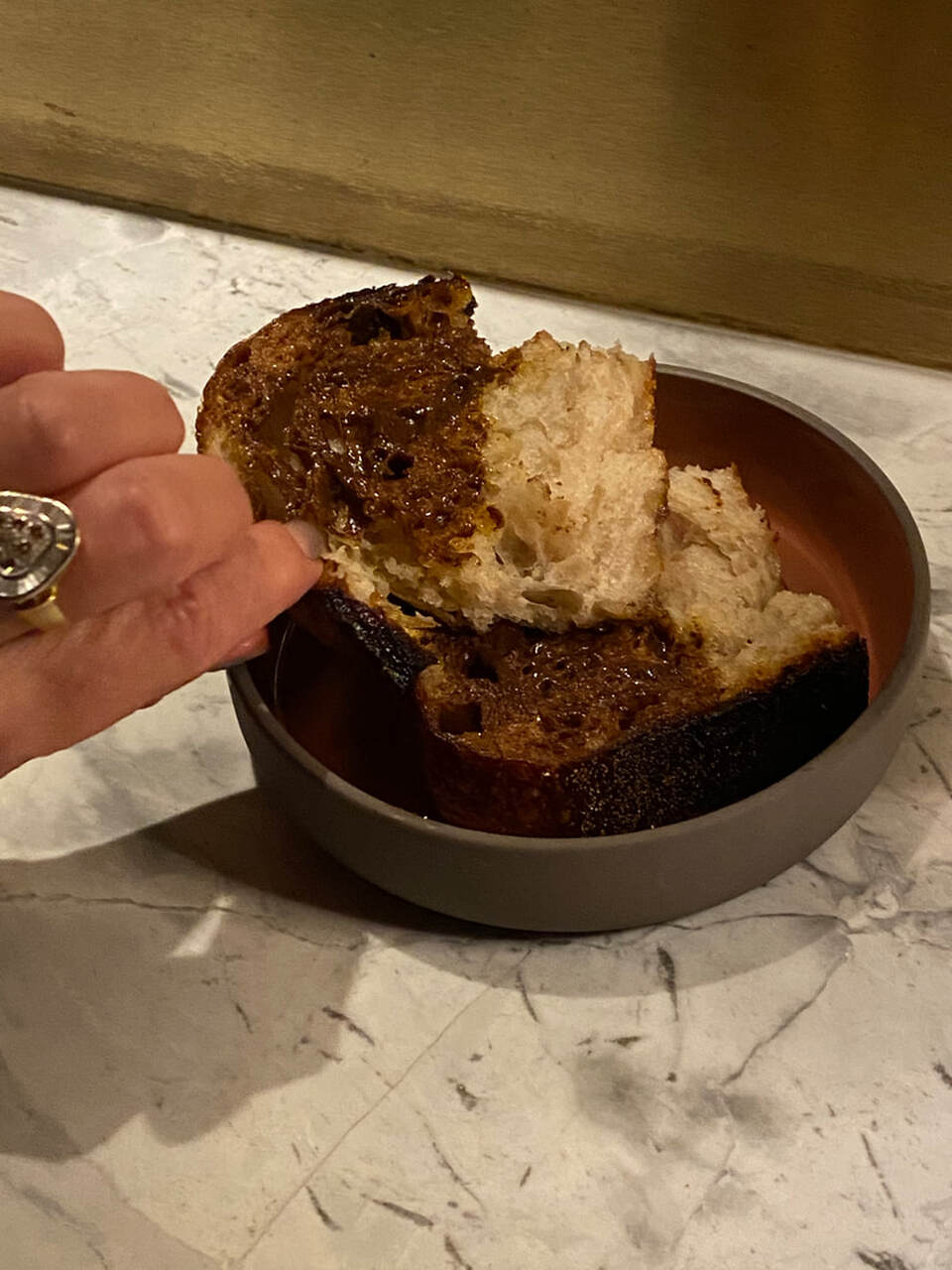 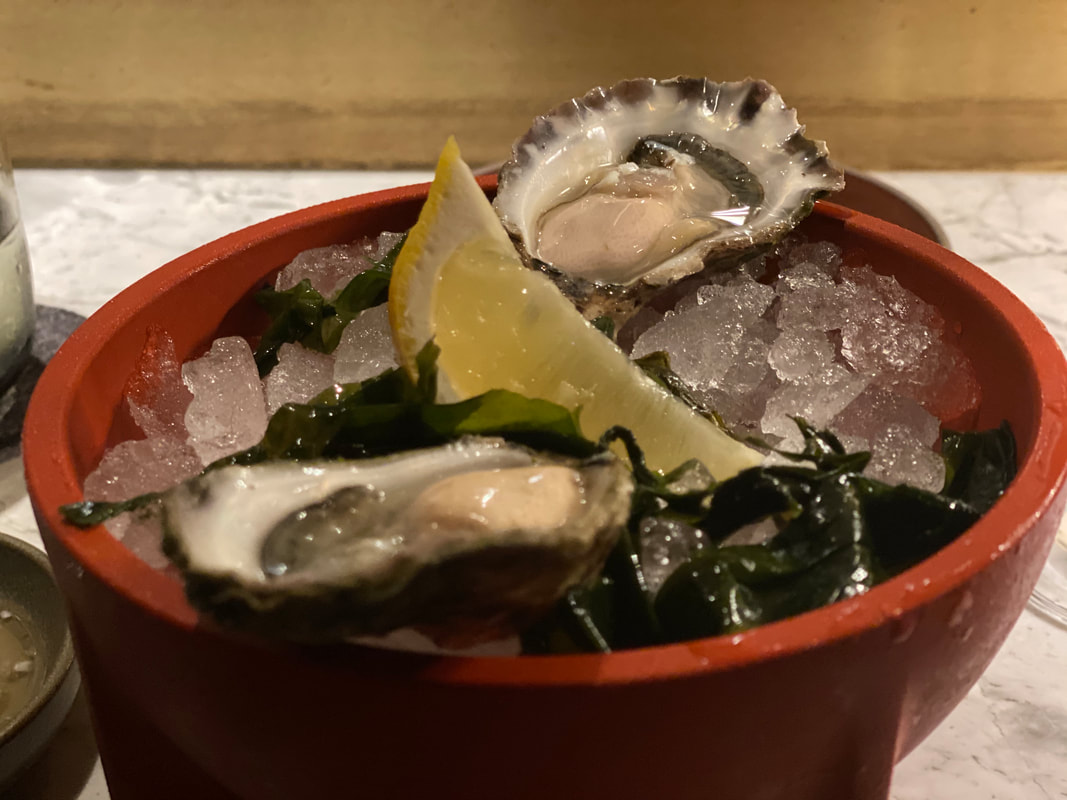 2 oysters each to go with a glass of Methode Tasmanoise; House of Arras Brut Elite from Tasmania 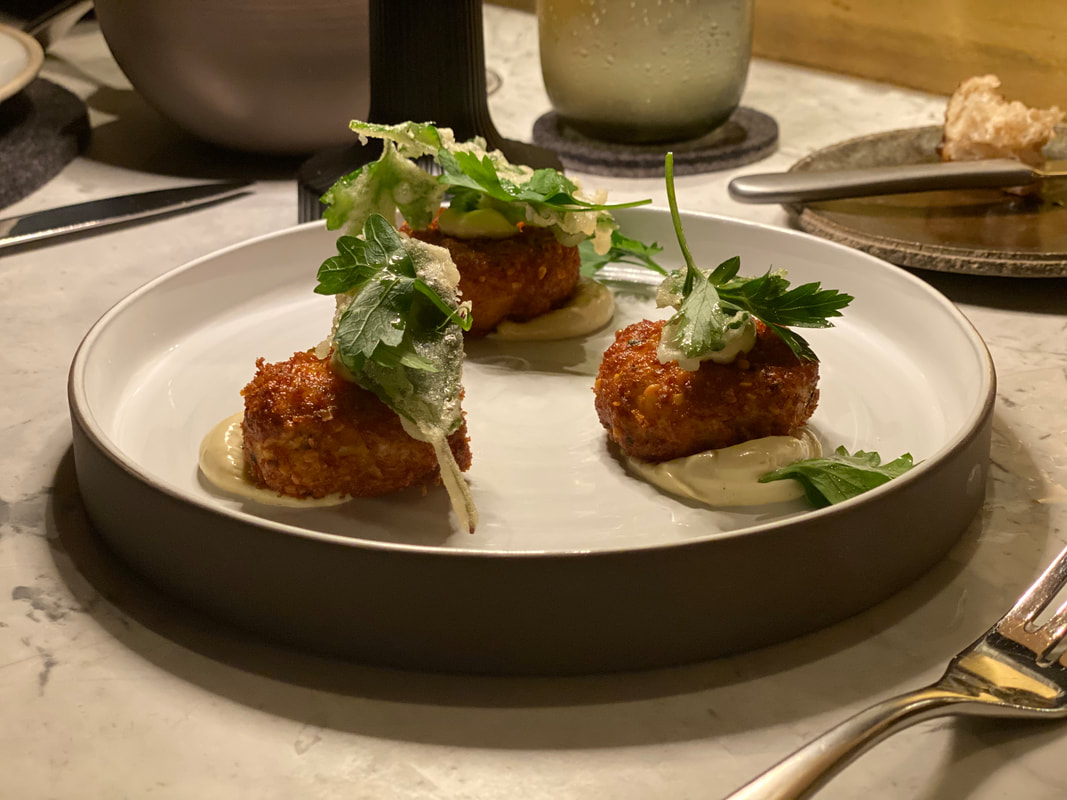 Crab cakes, fried leaves, oyster mayonnaise | They could have tasted more of crab, a little bland ... The Mayonnaise was spectacular though 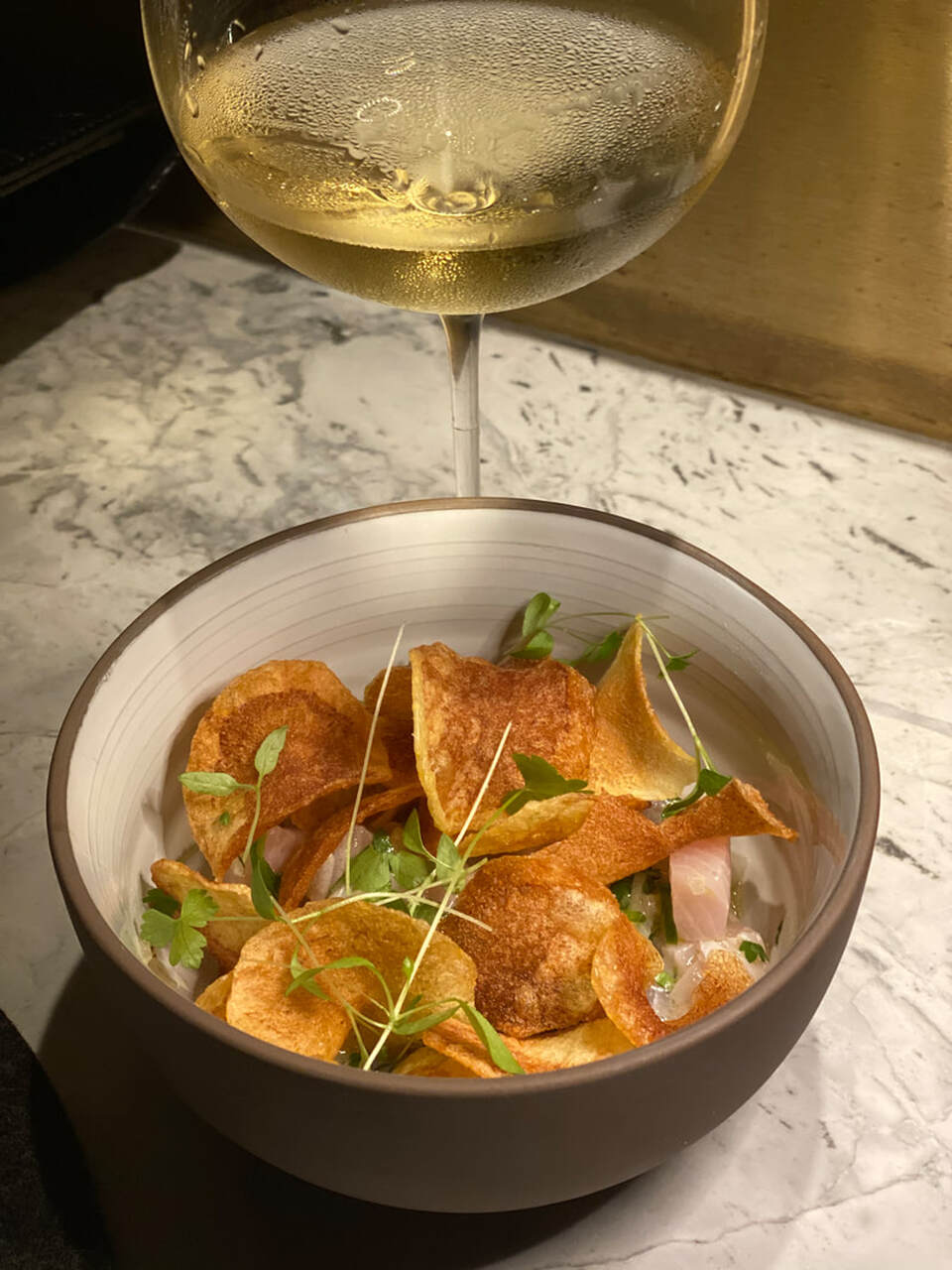 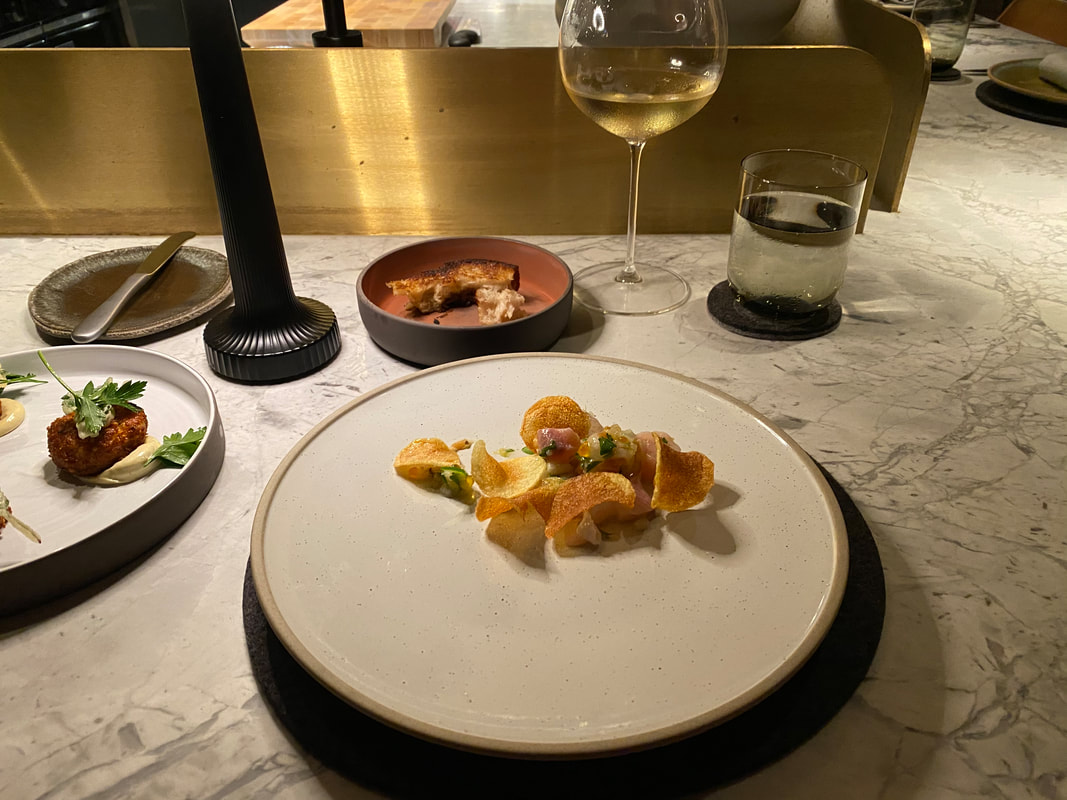 Raw kingfish, lychee, grilled ginger, coriander, chips, plated for me by my guest 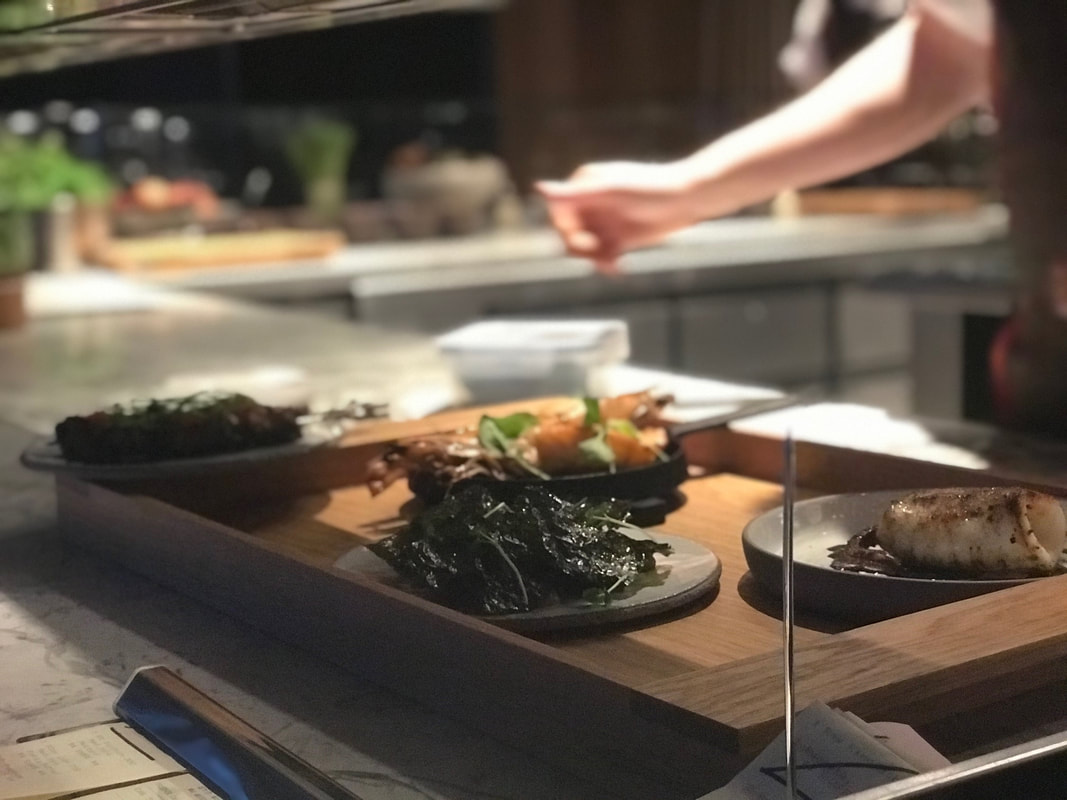 The pass of the Ash Kitchen 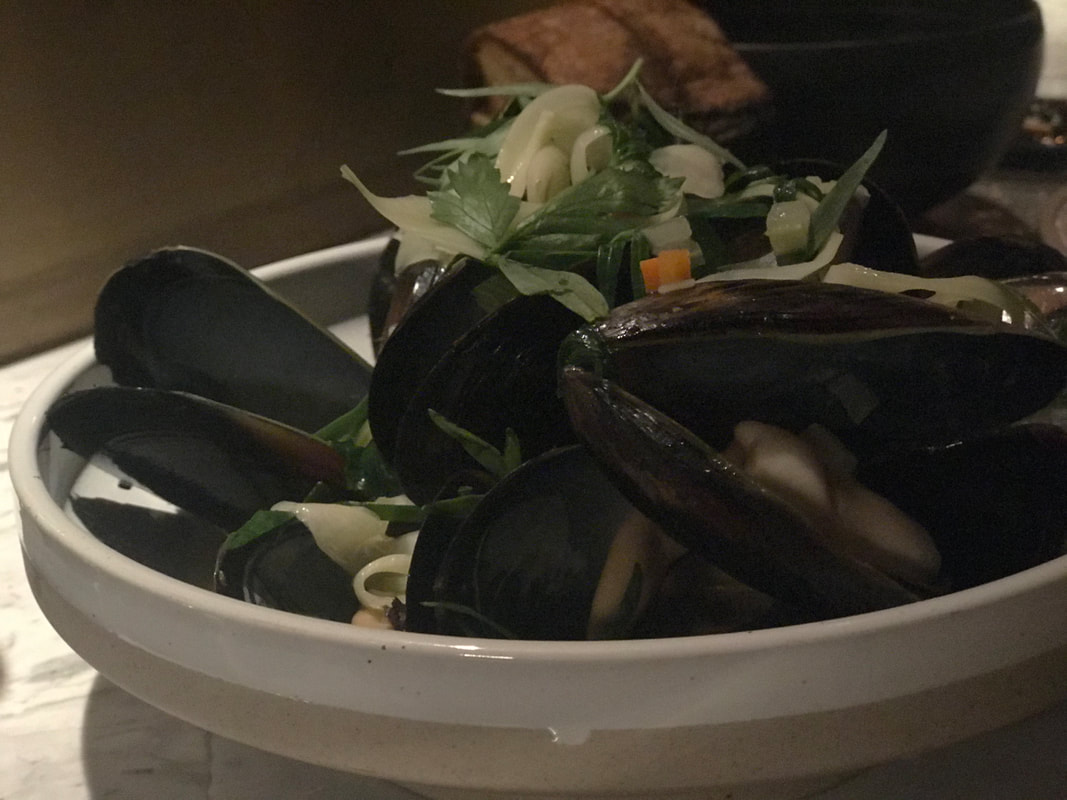 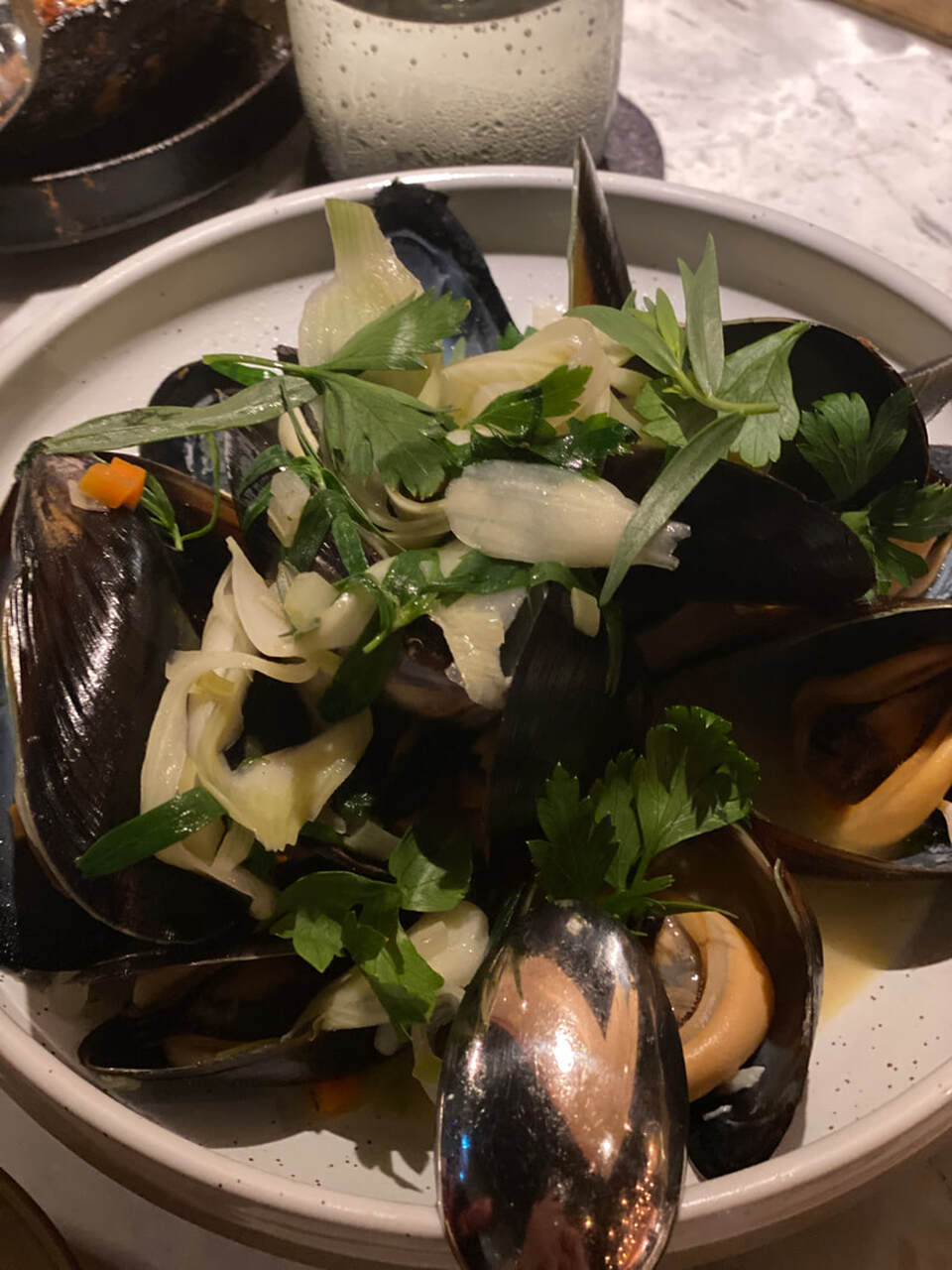 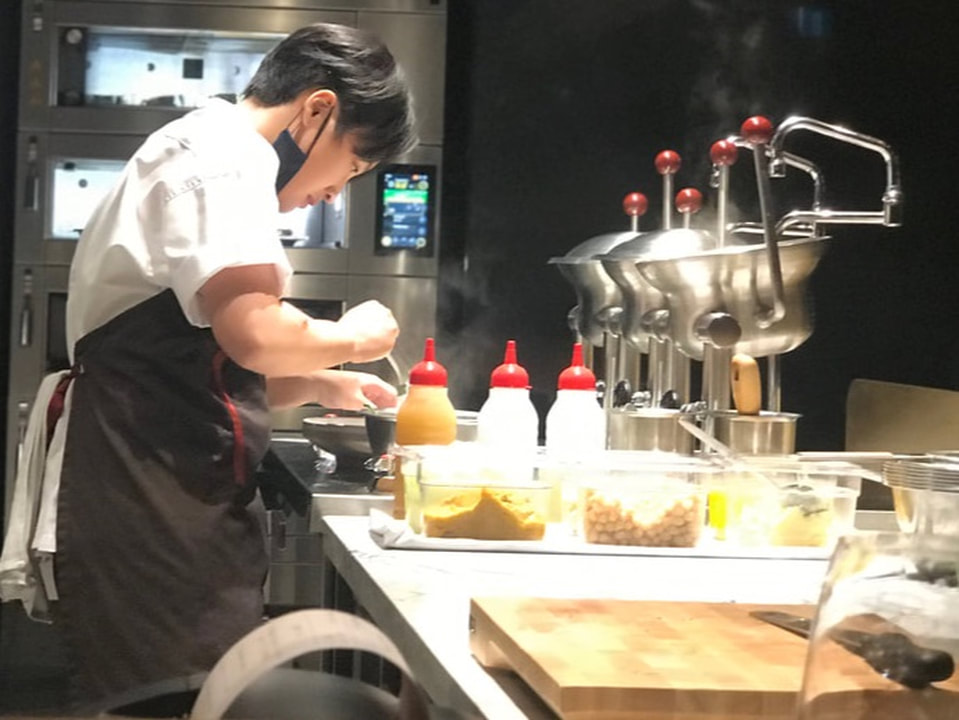 Blue mussels, aromats, toasted bread, bottarga cream | The broth was SO delicate! | Prepared in the “steamettes” seen on the right 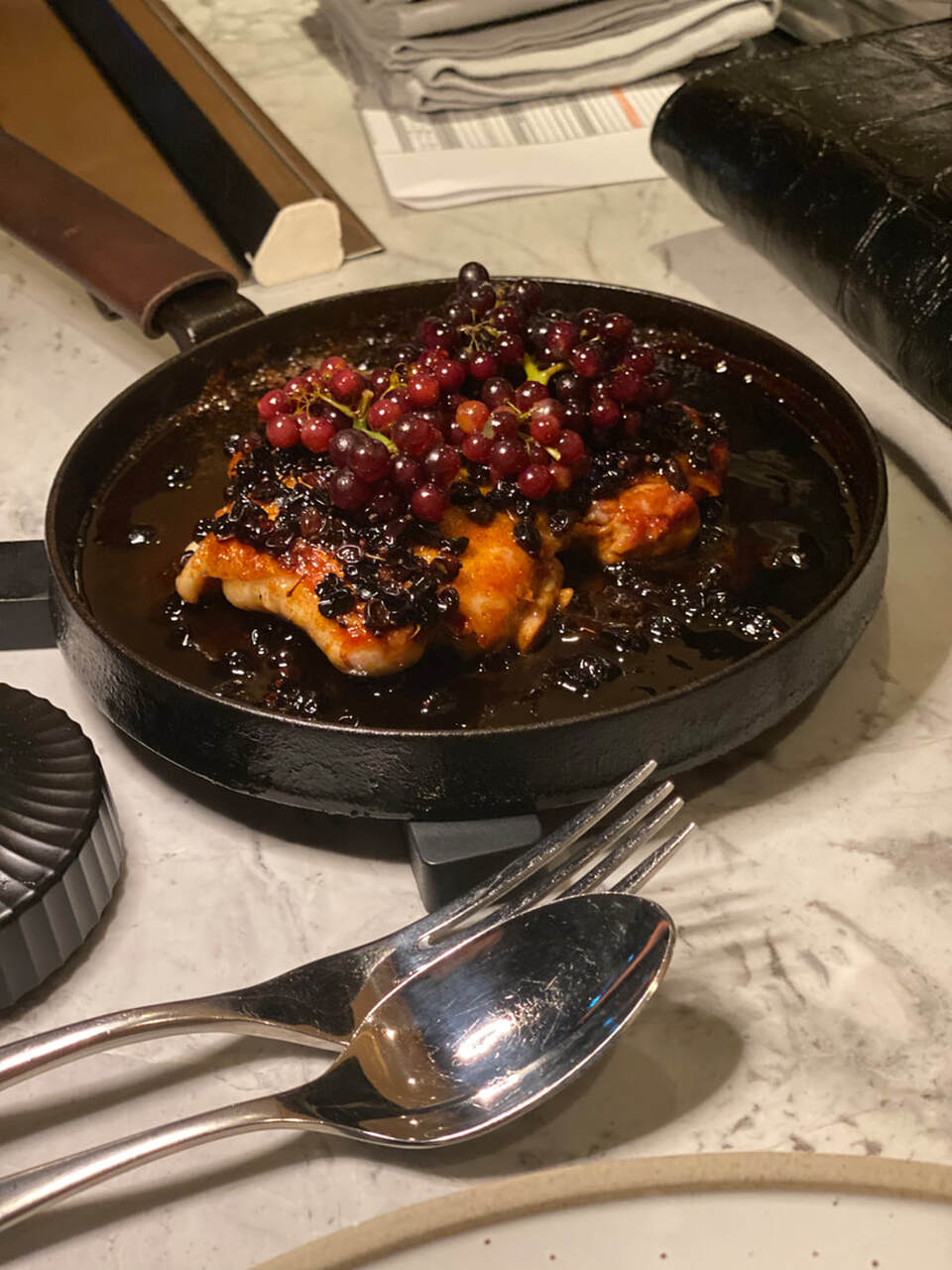 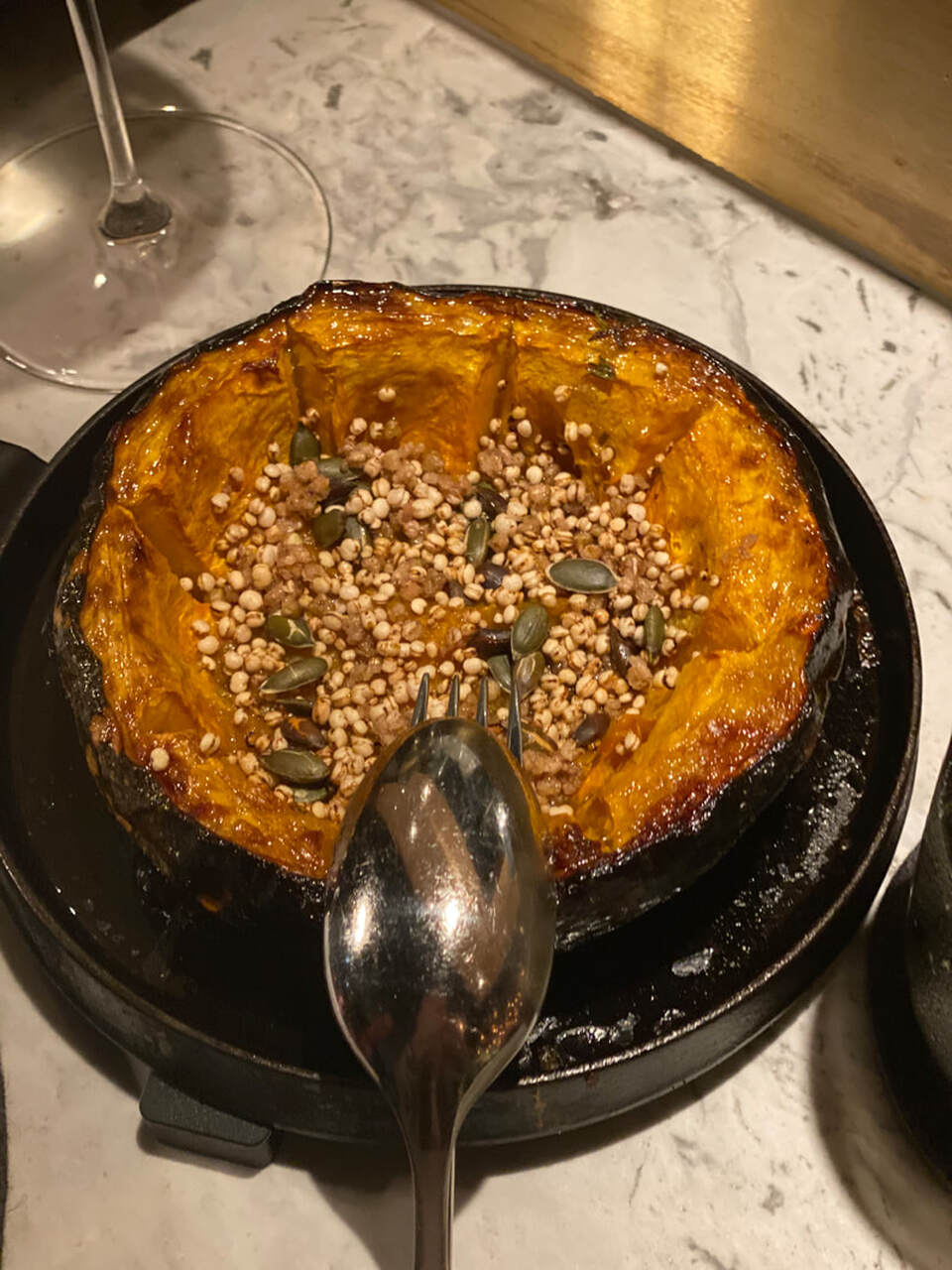 Wood roasted pumpkin, pumpkin seeds, grains | And that was like dessert really | A tiny bit too salty, but the meat of the pumpkin was cooked to perfection 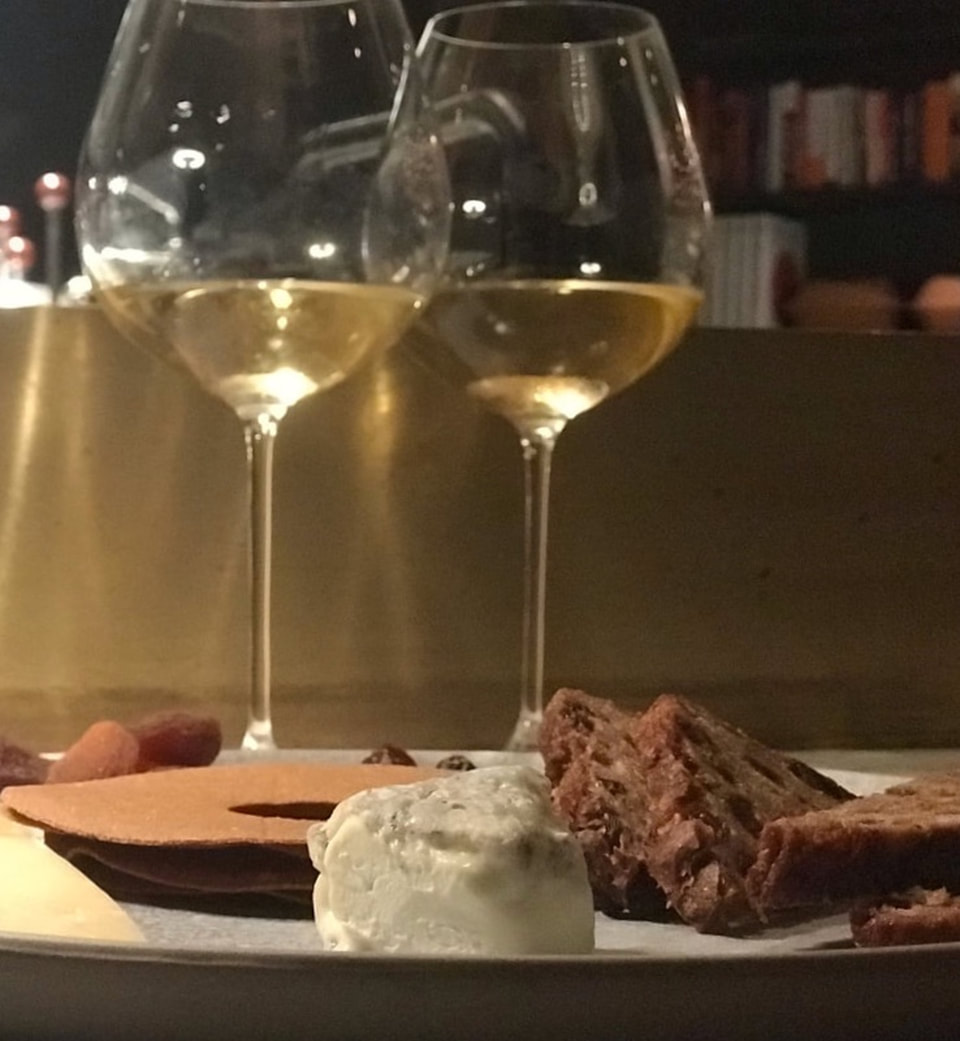 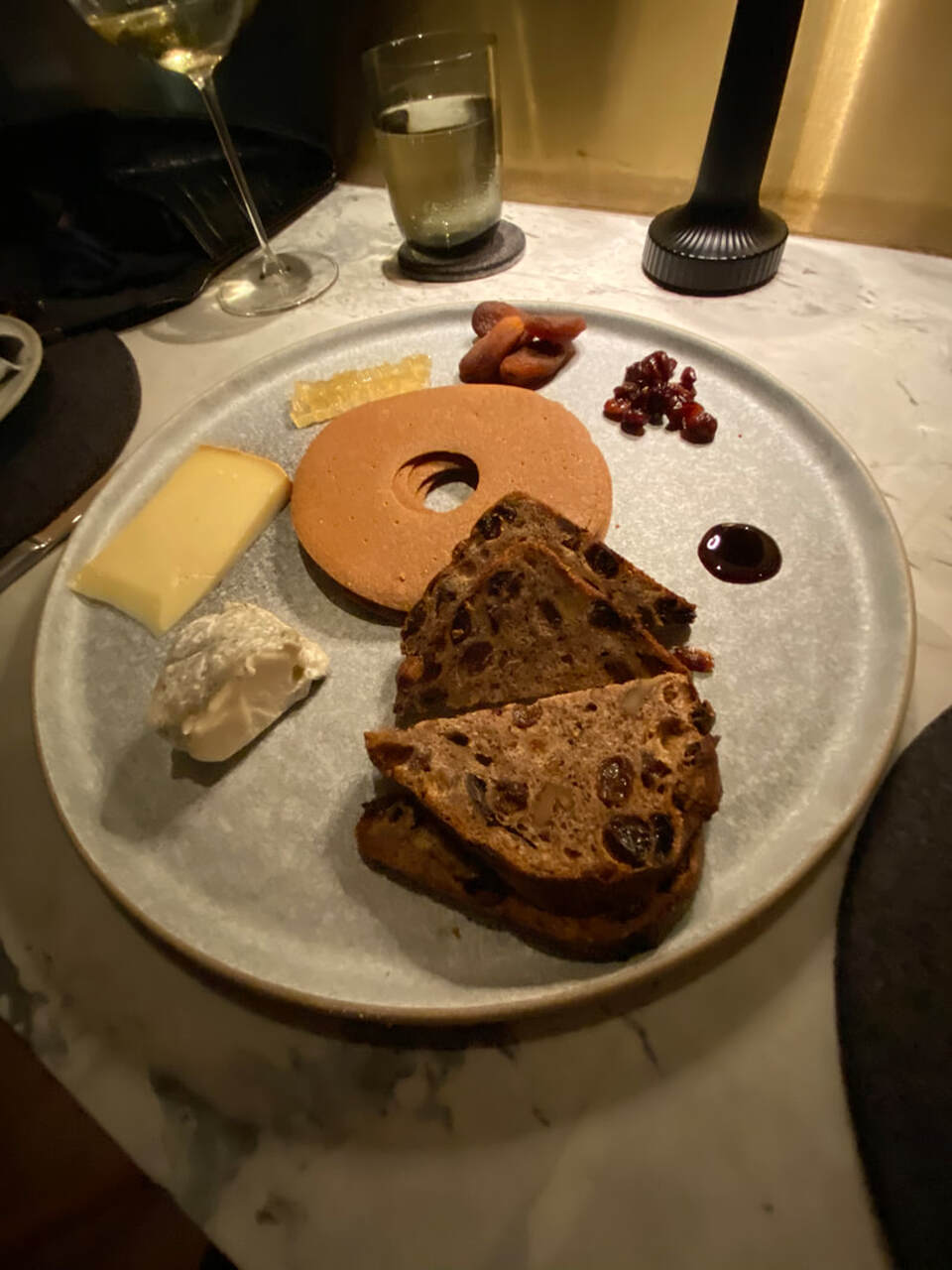 Well, we stayed 3 and a half hours enjoying the food, the theatre of the kitchen and each other company, not to mention the Chablis expertly chosen by our sommelier. I almost missed the last ferry back home! A good sign...

Considering the restaurant had been opened for a mere 6 weeks or so, what is achieved in these kitchens is amazing!
At the same time, the only thing that we think needs improvement is the service...
They had 160 guests that night and it was difficult to catch the waiters and waitresses attention when it came to order more bread or another drink. The synchronisation between the four kitchens is clearly not yet one of an orchestra, but we believe each player were trying their best and were charming and polite even if a little overwhelmed at times..

The menu might be a little confusing to read at first, but the Maitre d' spent a good amount of time with us helping to decide a reasonable amount of dishes from all kitchens without sending us broke or obese...
No risk of that as neither of us could be considered skinny, maybe because cue have too much skin in this epicurean business...

We/I would definitely return or recommend you visit soon. Booking essential, you have been warned!
Bon appetit!