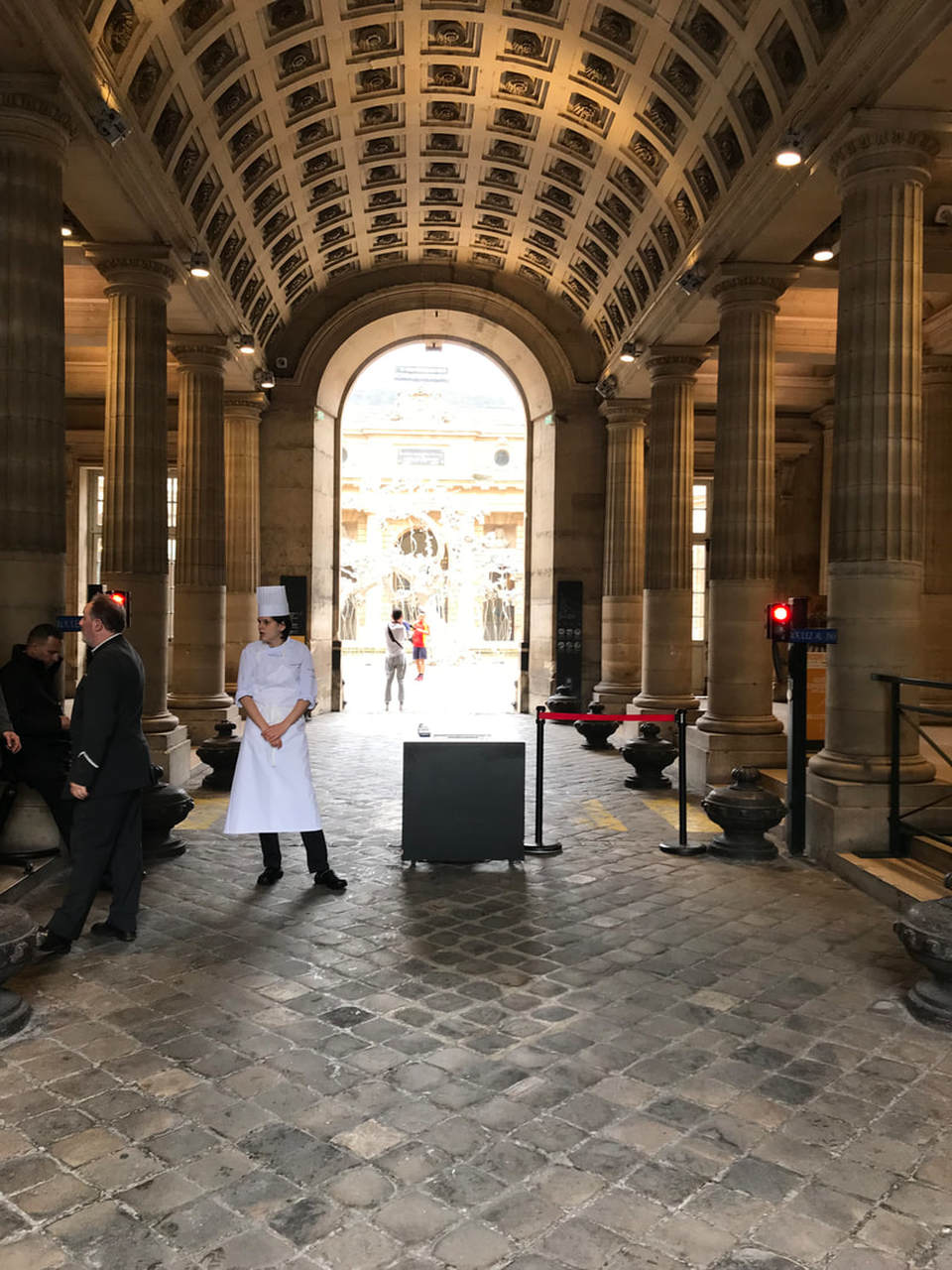 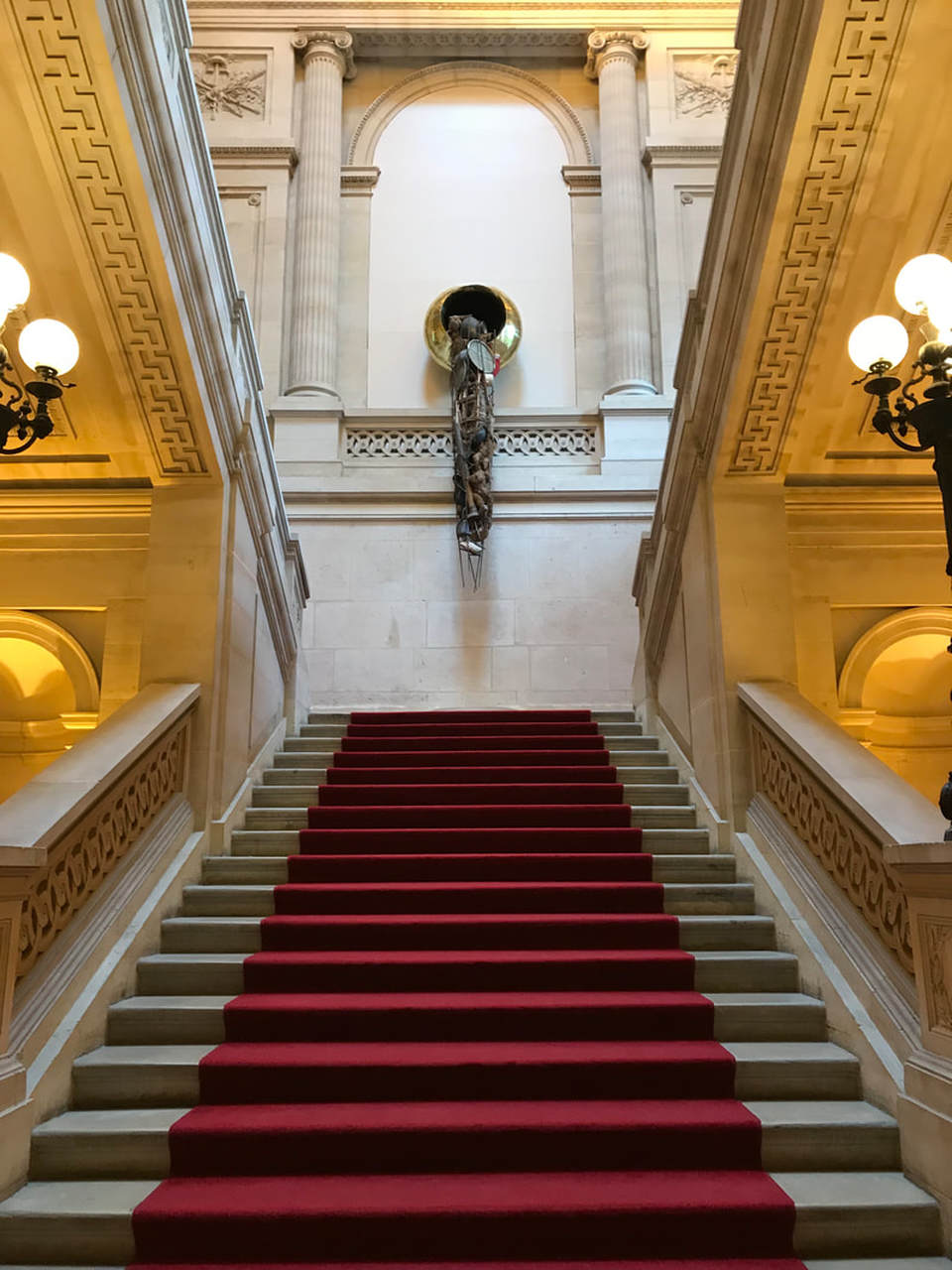 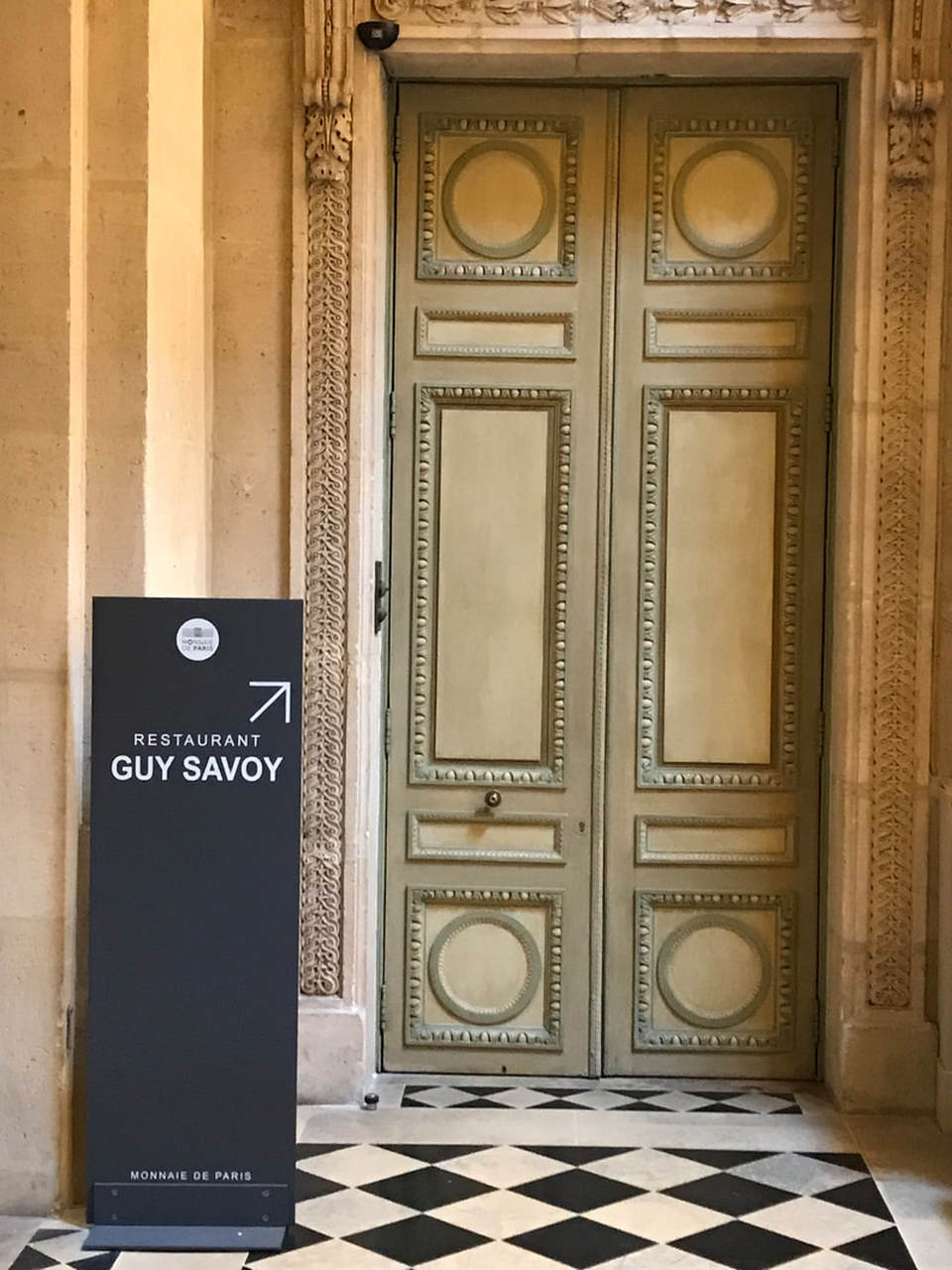 Just getting there is an emotional experience, almost like a Masonic initiation, as no less than four people welcome you downstairs then upstairs behind these automatic doors. You are then shown to your table, and mine was in one of the "petits salons" where only 11 guests ended up having lunch with me! Personal service like no other! attentive but not oppressive, formal but with a casual flair, a rare experience...

A room with a view, and the best food in the World, not to mention an inch thick wine list! 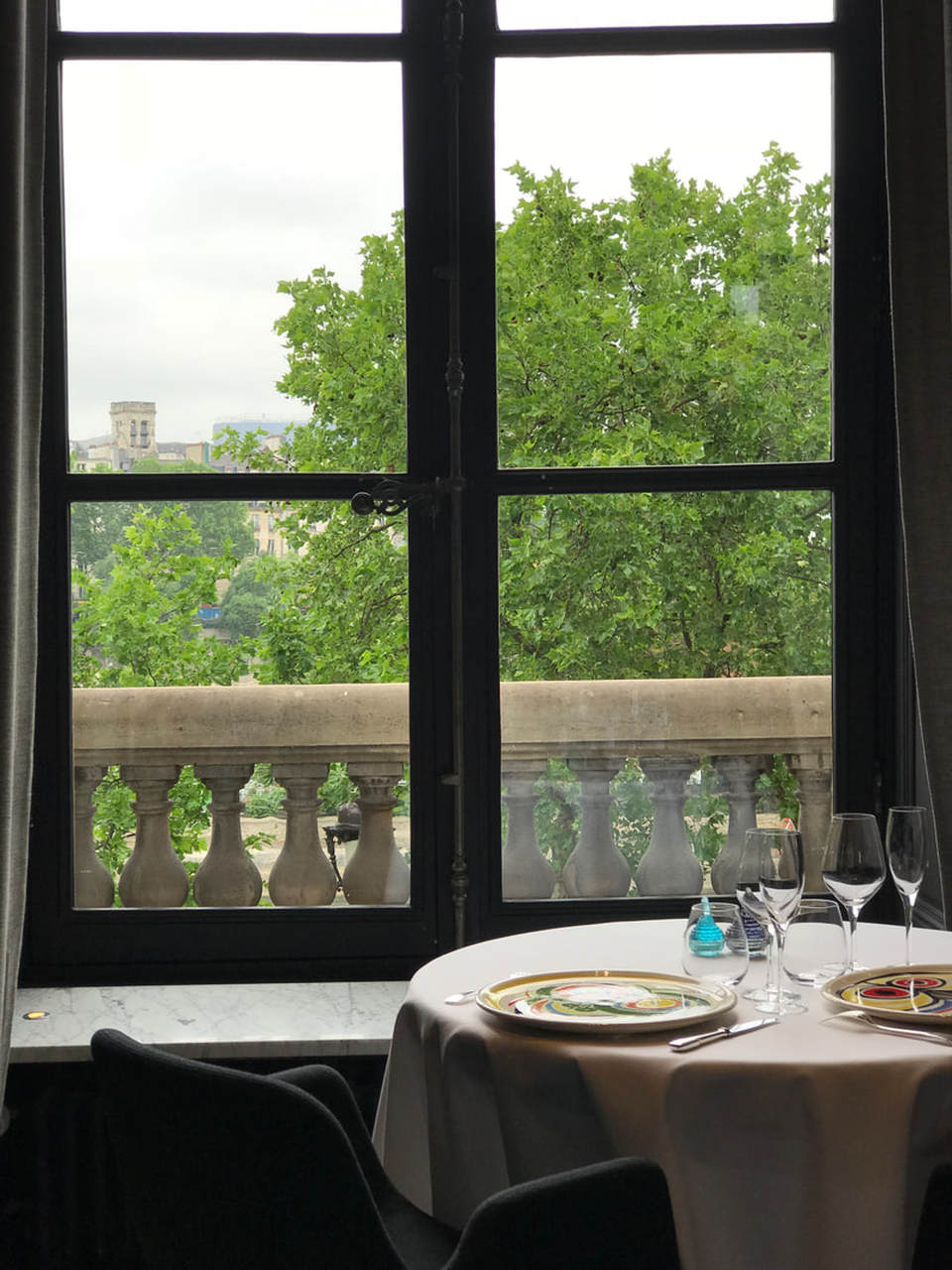 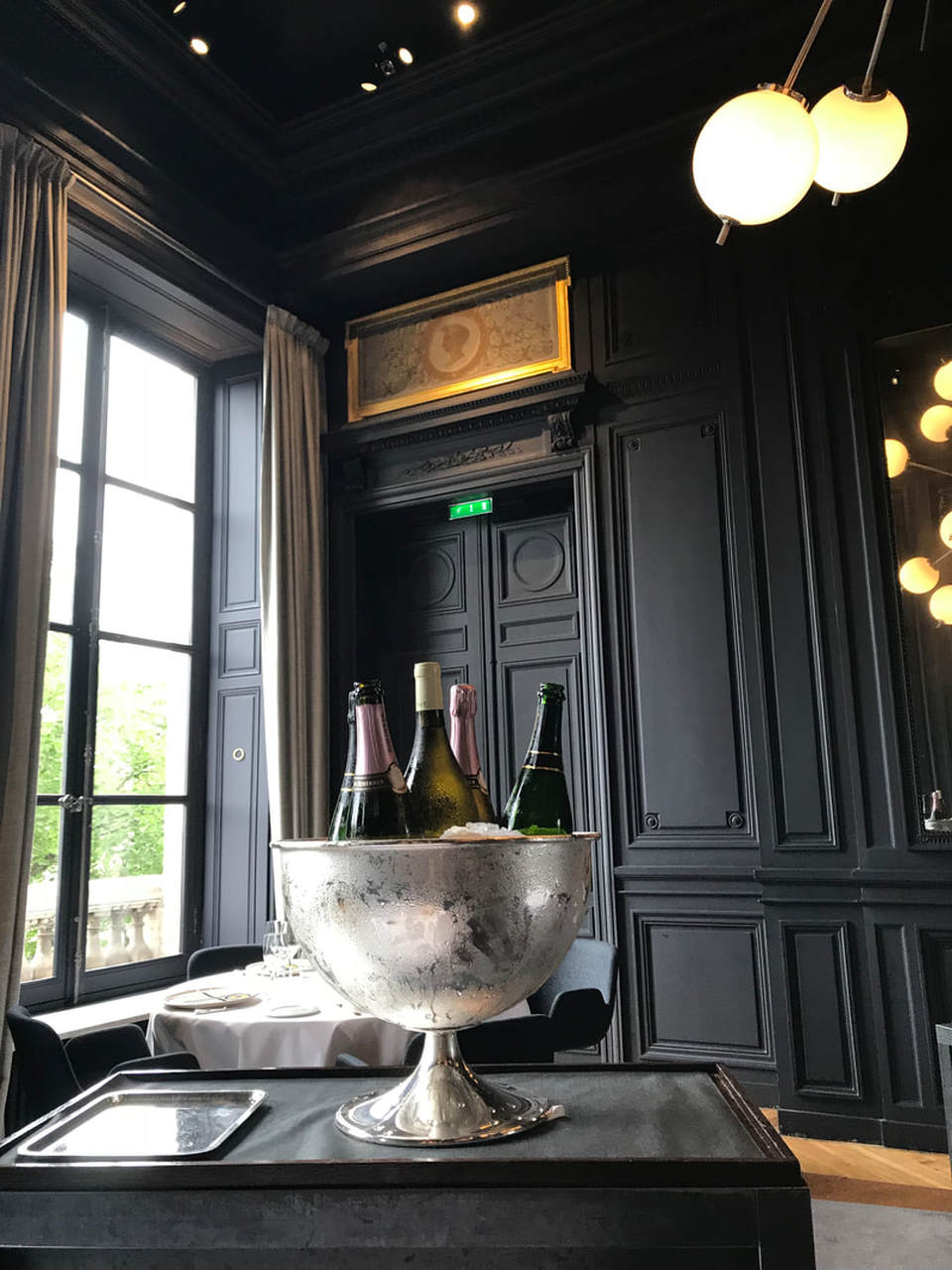 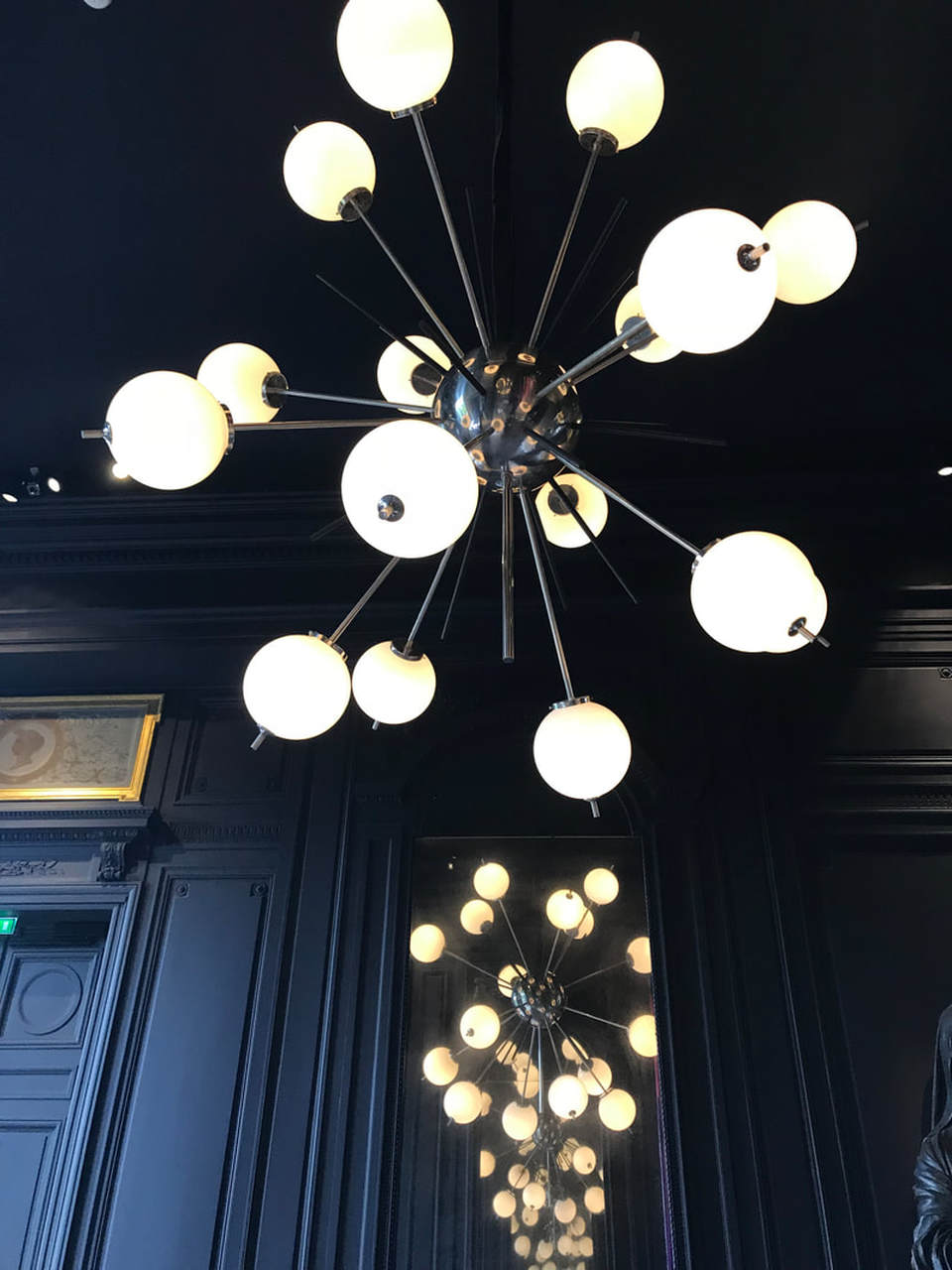 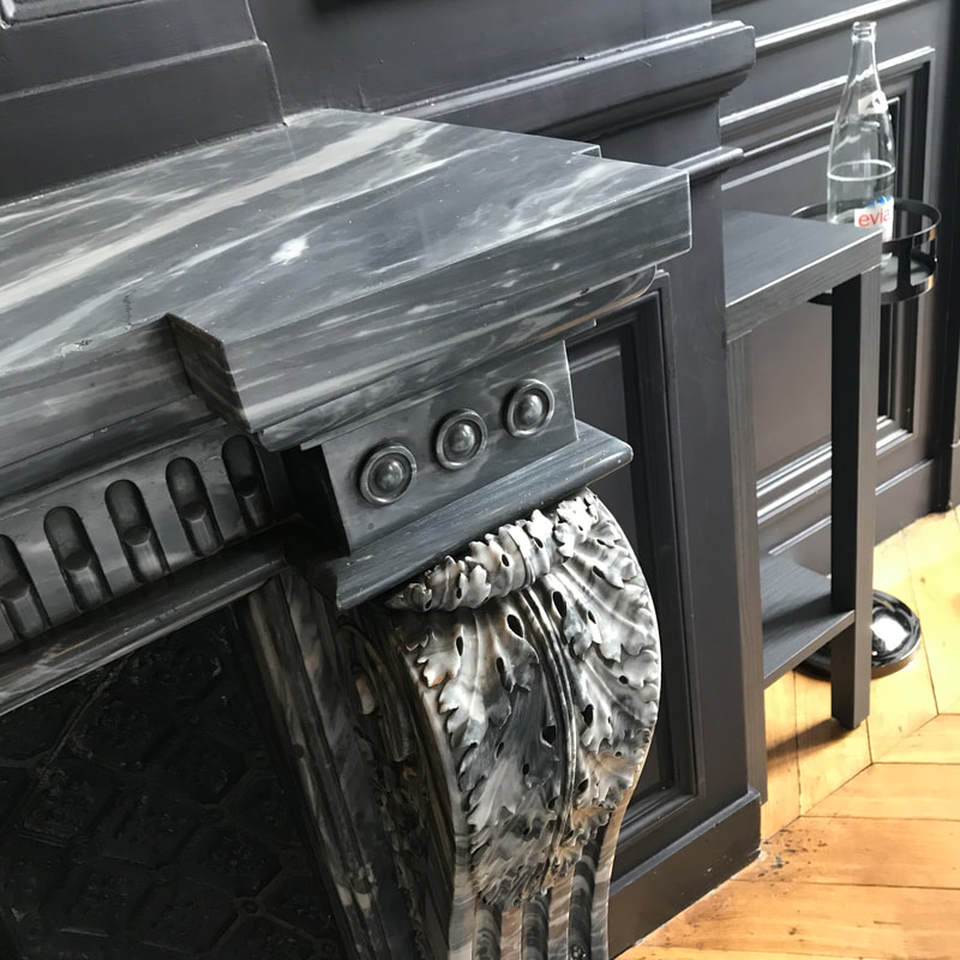 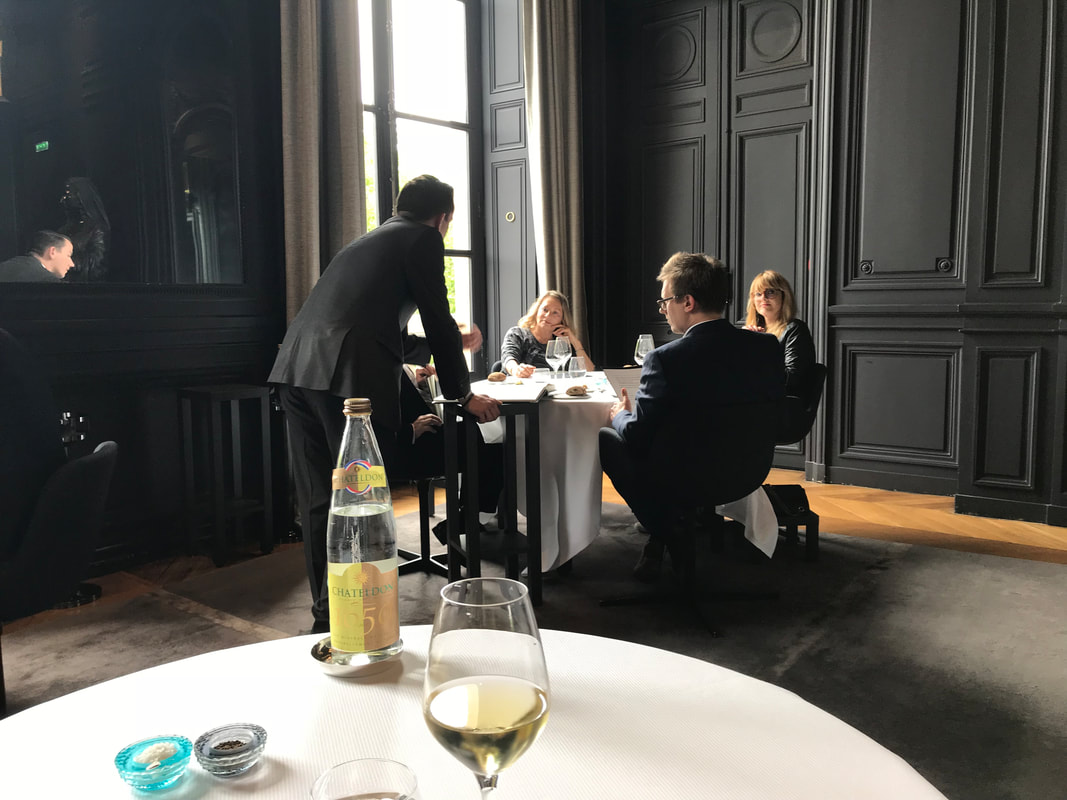 Well, what can I say? This is an historic monument into which my favourite French architect, Jean-Michel Wilmotte, has inserted a contemporary feel into this classic building, which is his trademark. He has worked with Guy Savoy on most of his restaurants, so there is an obvious chemistry between the two men which shows.
it comes across as an understated elegance, i suppose what most foreigners would call le French chic... 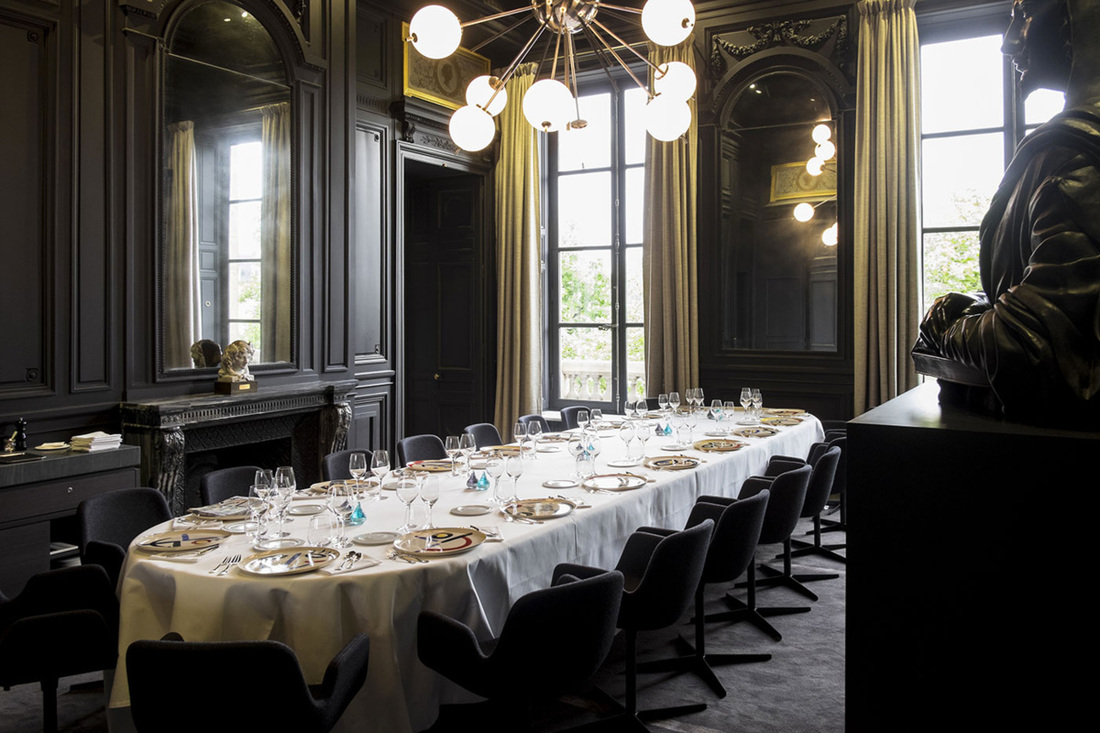 Now that we have set up the decor, let's get to the main theatre of gorgeous food and wines 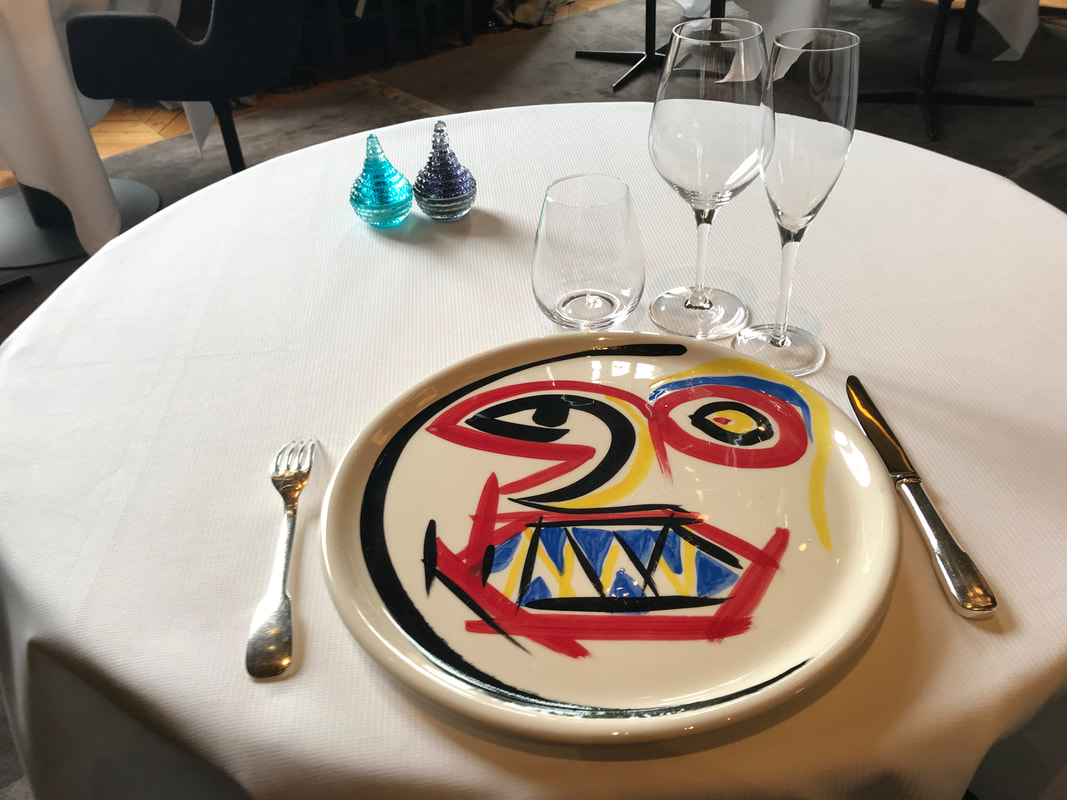 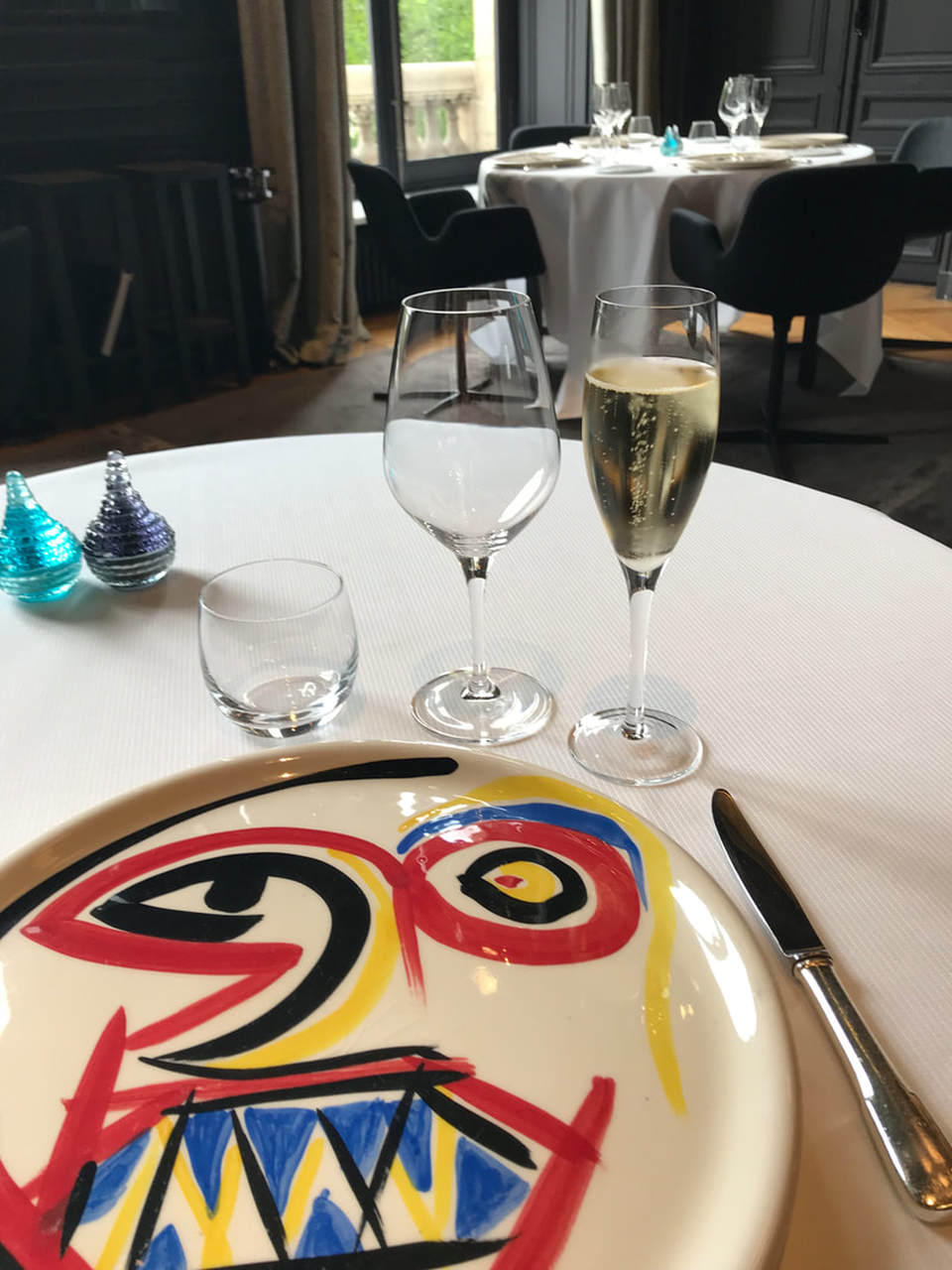 And a glass of Champagne to start with...it is my birthday after all 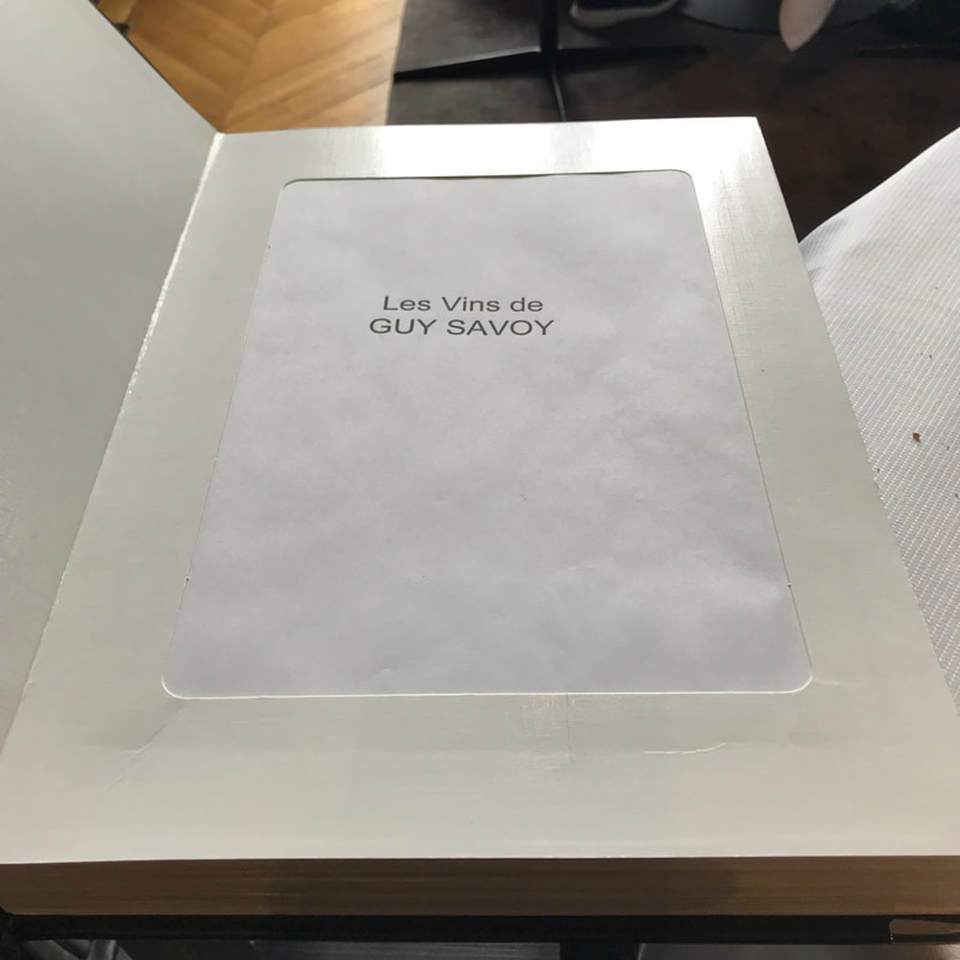 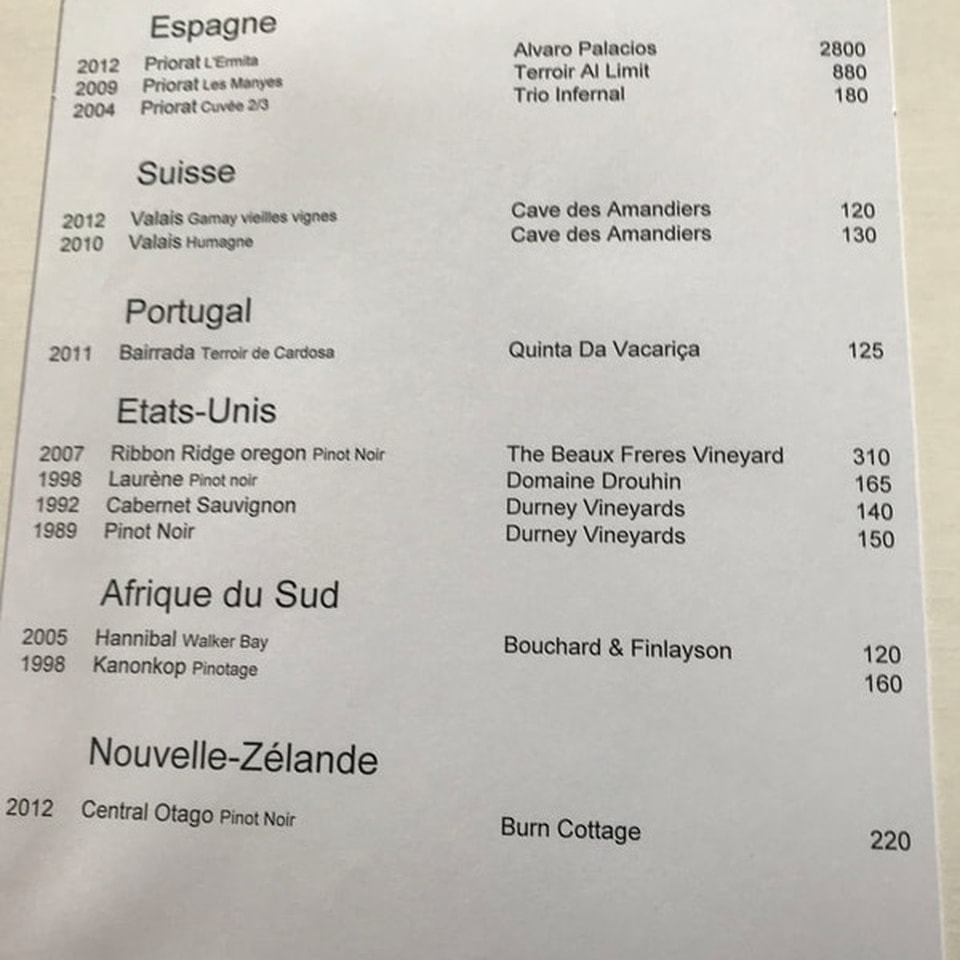 One page of international wines and not an Australian in sight,,,The prices are in Euros 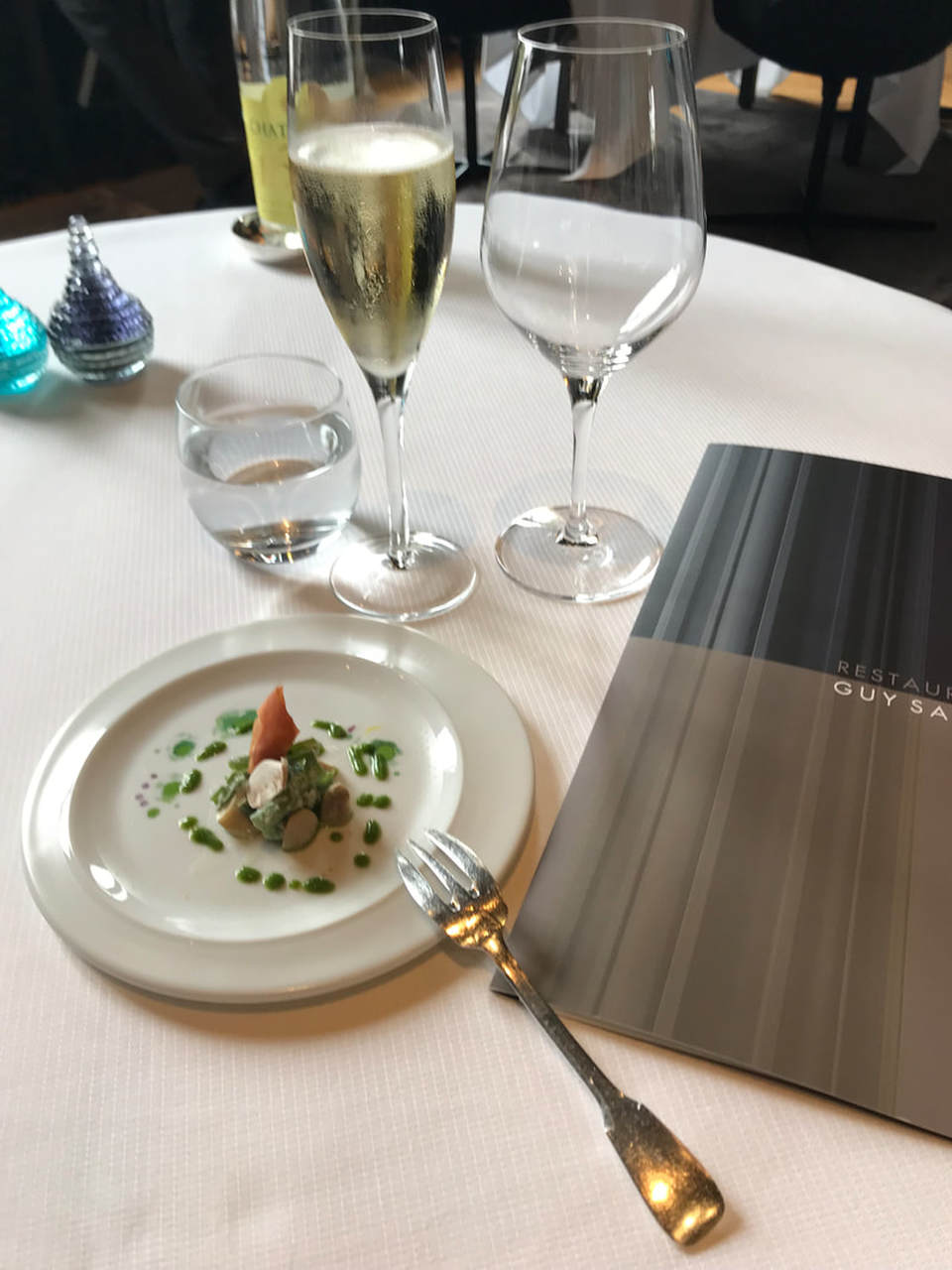 Amuse bouche number one, while you choose your dishes and your wine(s) 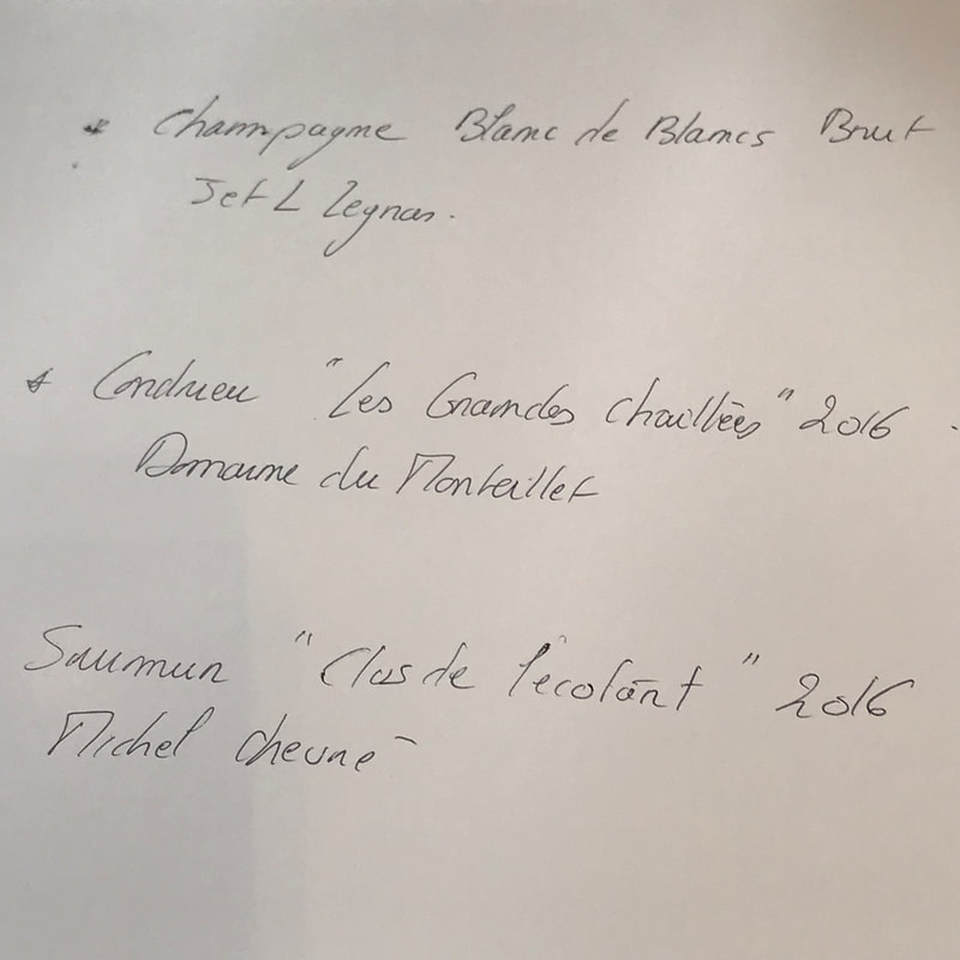 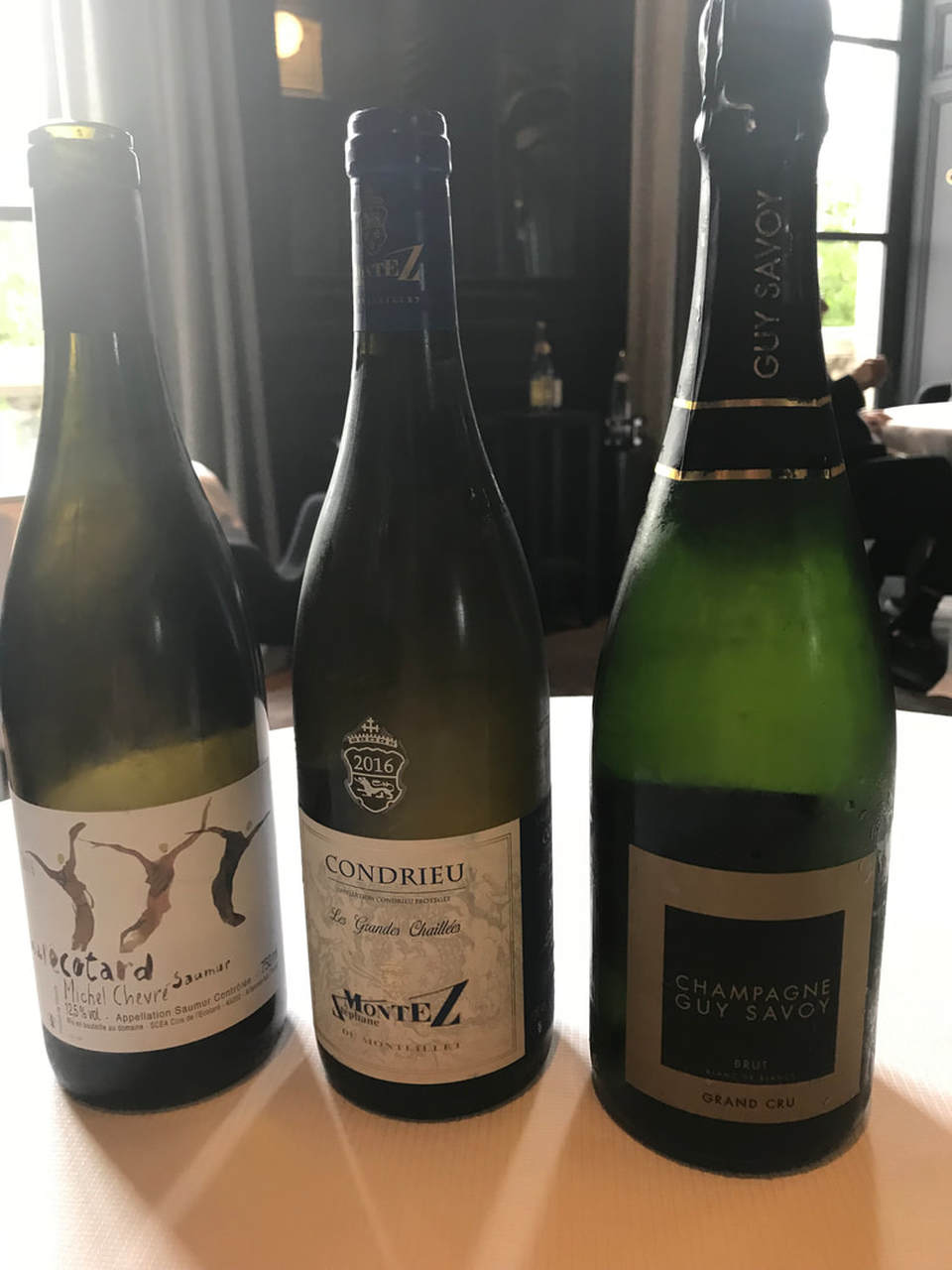 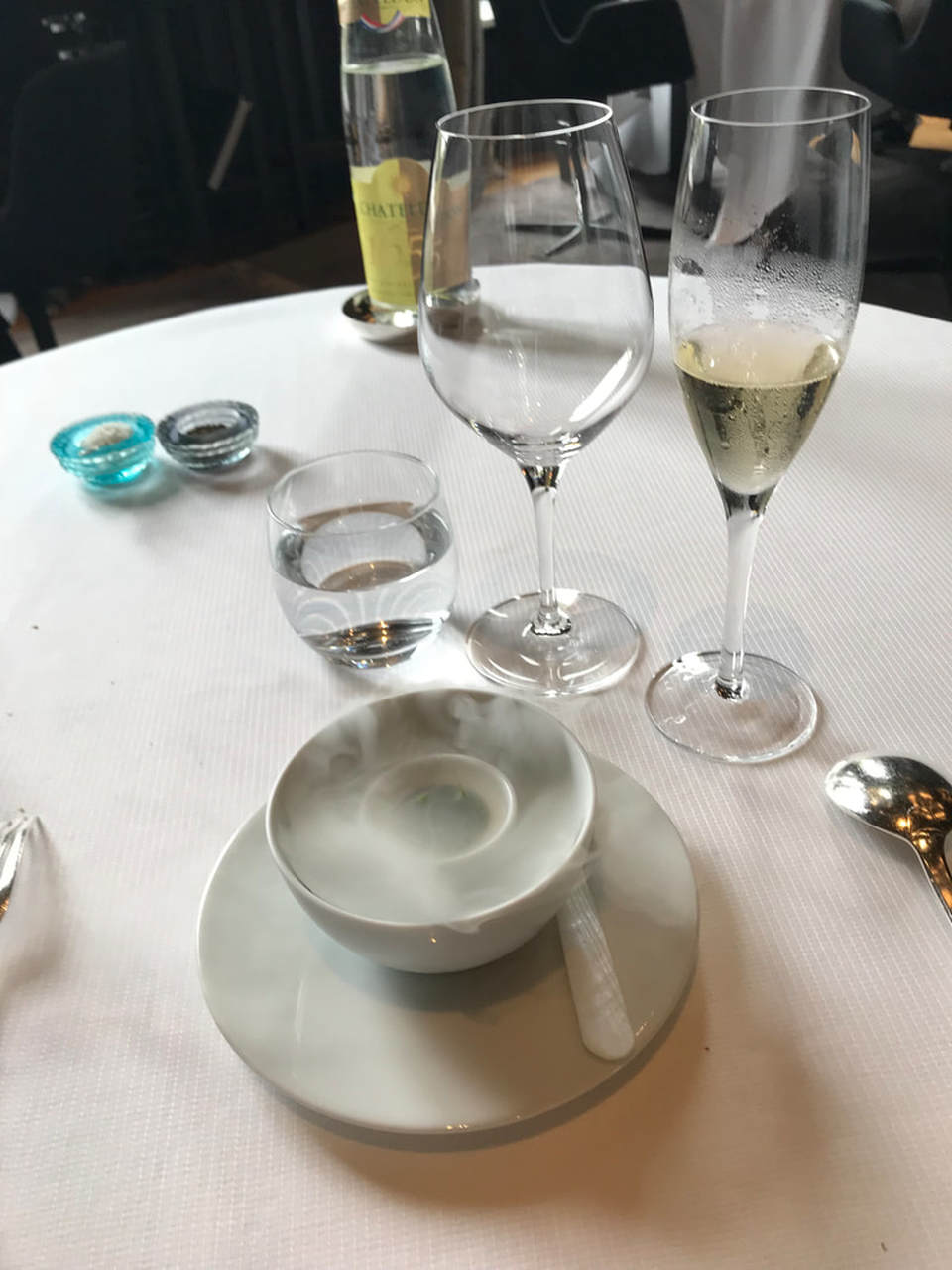 Amuse bouche number two: the egg
So it might be a good time now that we have a glass of Champagne in one hand and an eye on te menu to give you a hint: the best and most affordable way to sample Guy Savoy's confections is to book lunch online. It will cost you 130 euros per person for a three courses menu, with three choices for each, mainly the signature dishes in all three categories. But Guy Savoy has always been famous for all the extra little dishes he serves in between courses, so I ended up with maybe 7 to 8 courses, a real bargain! Wine is extra but a lot of the wine list is available by the glass so as a single diner this is a very good way to sample wines that would be out of my budget normally. If you are a couple, you might start with a glass of Champagne - 4 to choose from by the glass - and then try to seduce the sommelier into choosing one bottle of wine to suit your menu. It might not be possible, but it is worth a try!
So I had a glass of Champagne to stat with, 2 glasses of Condrieu then a glass of Saumur with dessert. Then un café which comes with petits fours bien sûr, and my bill ended up being 226 euros, service compris! Not bad... 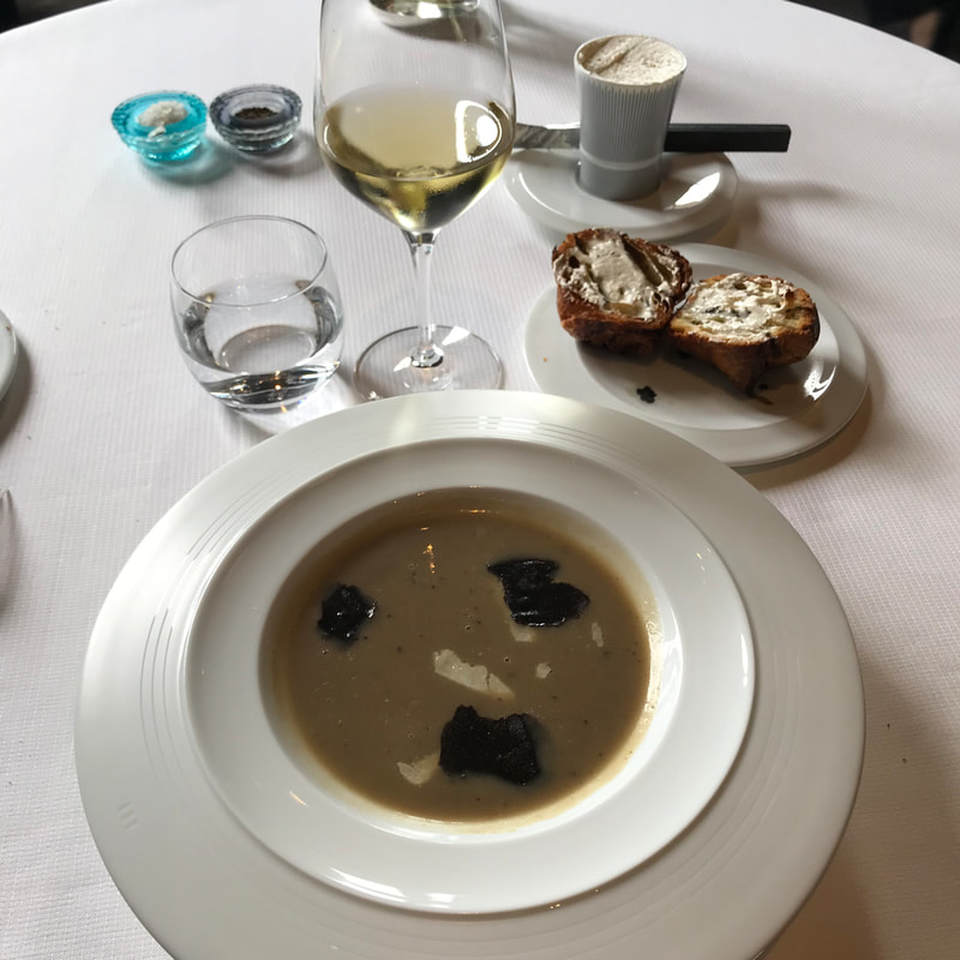 There is no words to describe this dish! And i should put a caveat here, as I am not a great fan of truffles, but this was just out of this world, the consistency, the marriage of flavours, the just enough quantity to savour it at leisure and the richness of the Condrieu to make the whole thing sing like a Beethoven concerto!
Oh, I almost forgot to mention the brioche and the butter that comes with it. I didn't dare clean my plate with it or even worse lick it as it would have been very bad manners, but the temptation was firmly there... 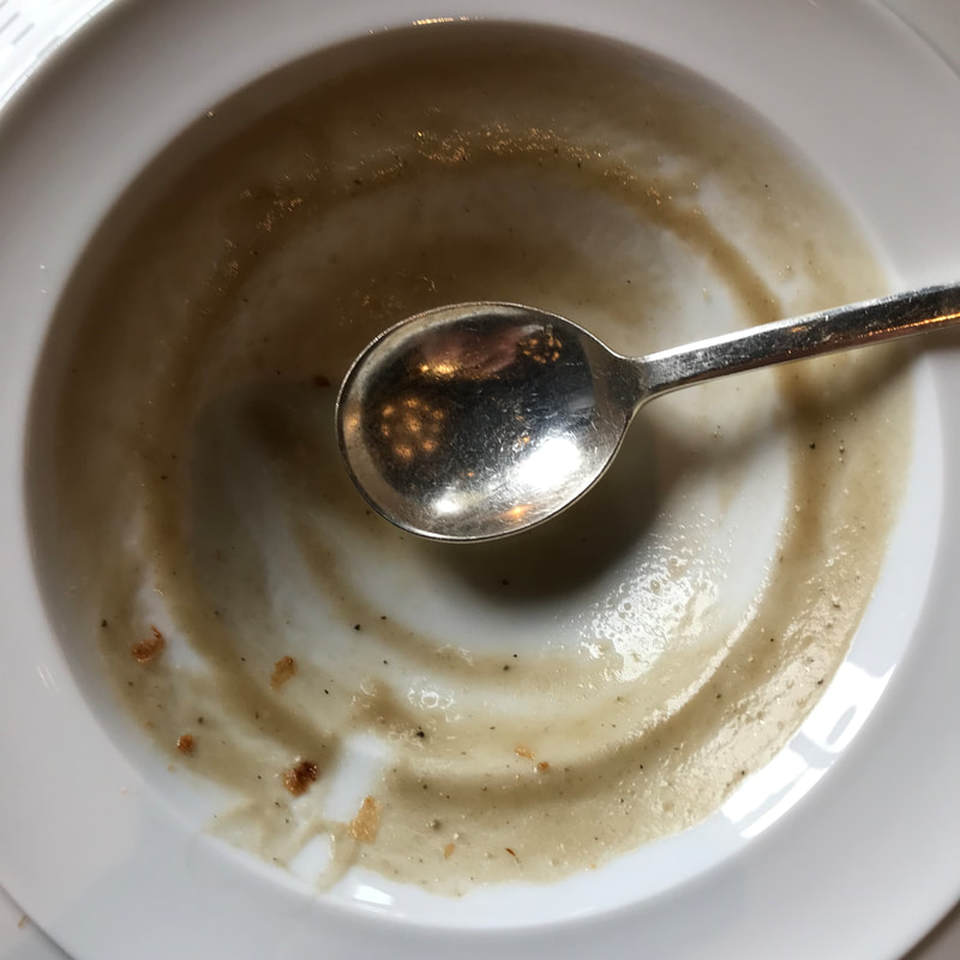 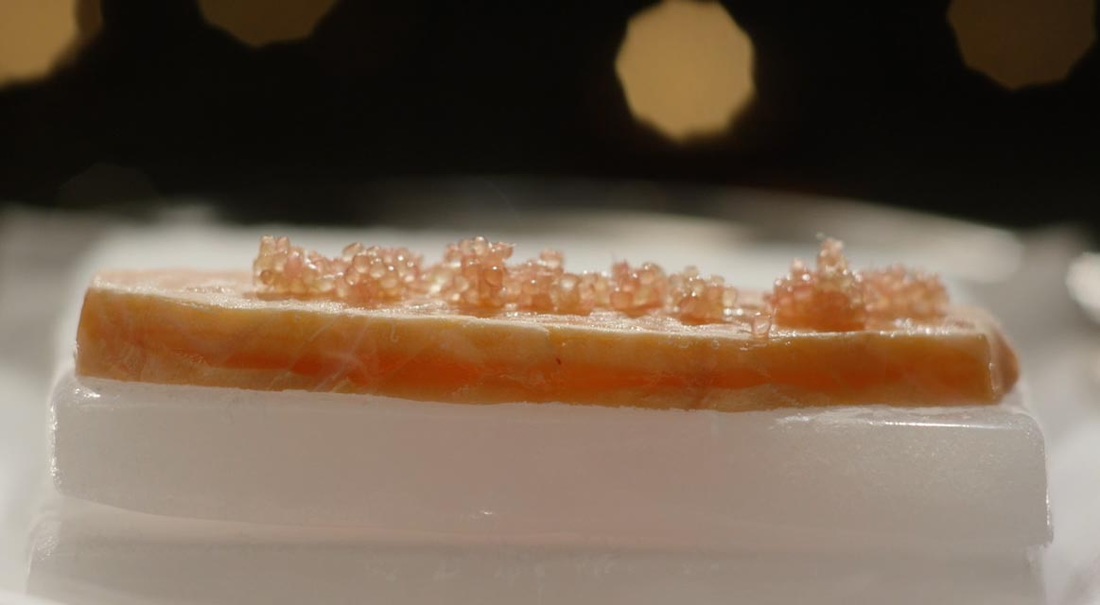 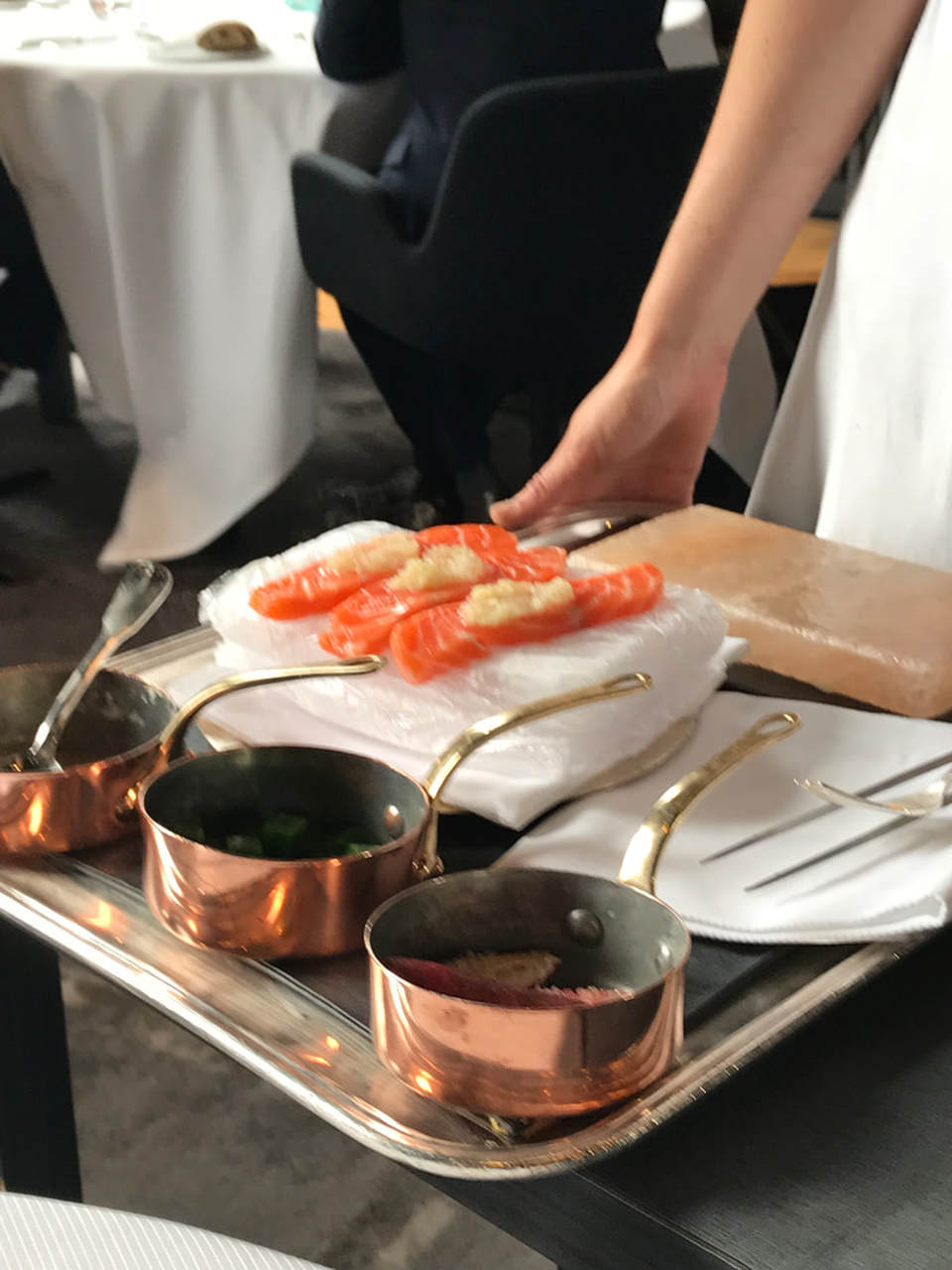 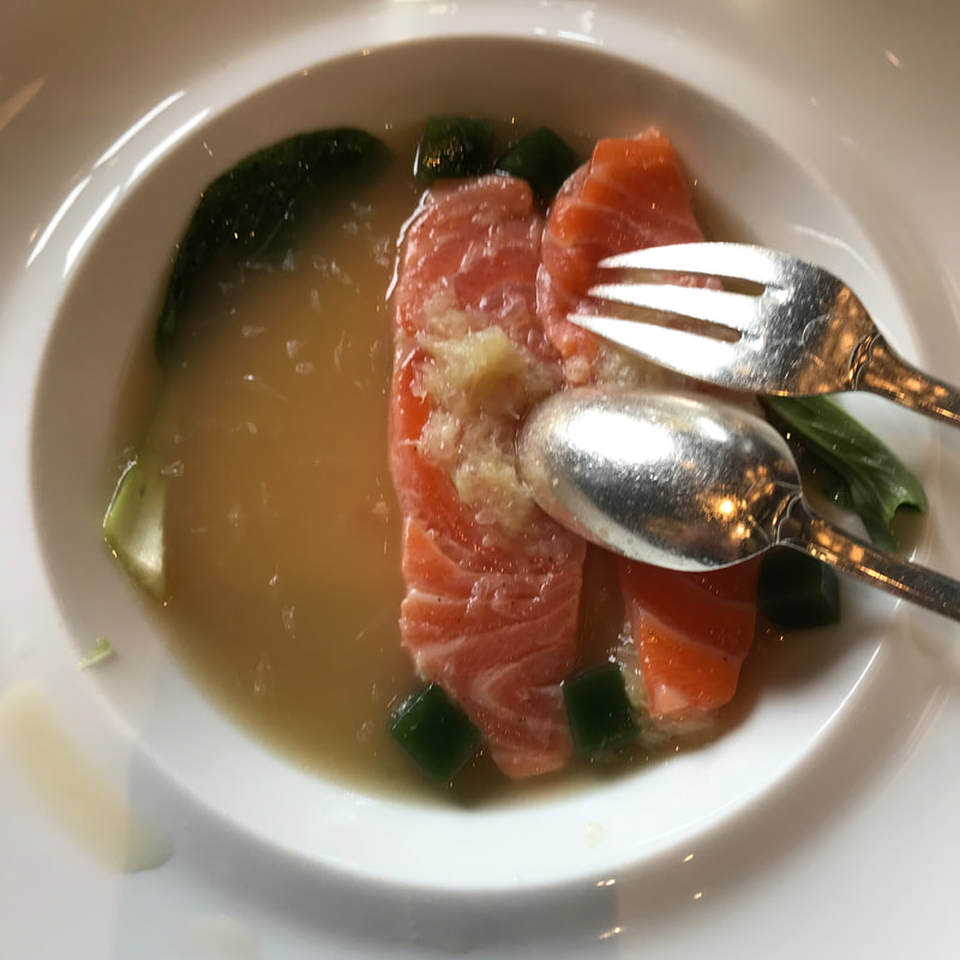 Talking about theatre, this it it, as Michael Jackson famously said! Check my IGTV story to see the video of the preparation of this very original dish at your table. If you follow my Instagram, you will already know that I could eat salmon for breakfast, lunch and dinner. I actually had some smoked salmon that morning for breakfast! It is an extraordinarily subtle dish, almost disappointing as I was expecting an explosion of flavours which Monsieur Guy is very famous for... But not here. it is all about the texture of the salmon which is not entirely cooked, neither entirely crudo either. The subtle spices of the bouillon and the three different citrus on top, including finger lime from Australia, are more like a quintet from Brahms than Le Sacre du Printemps from Stravinsky... 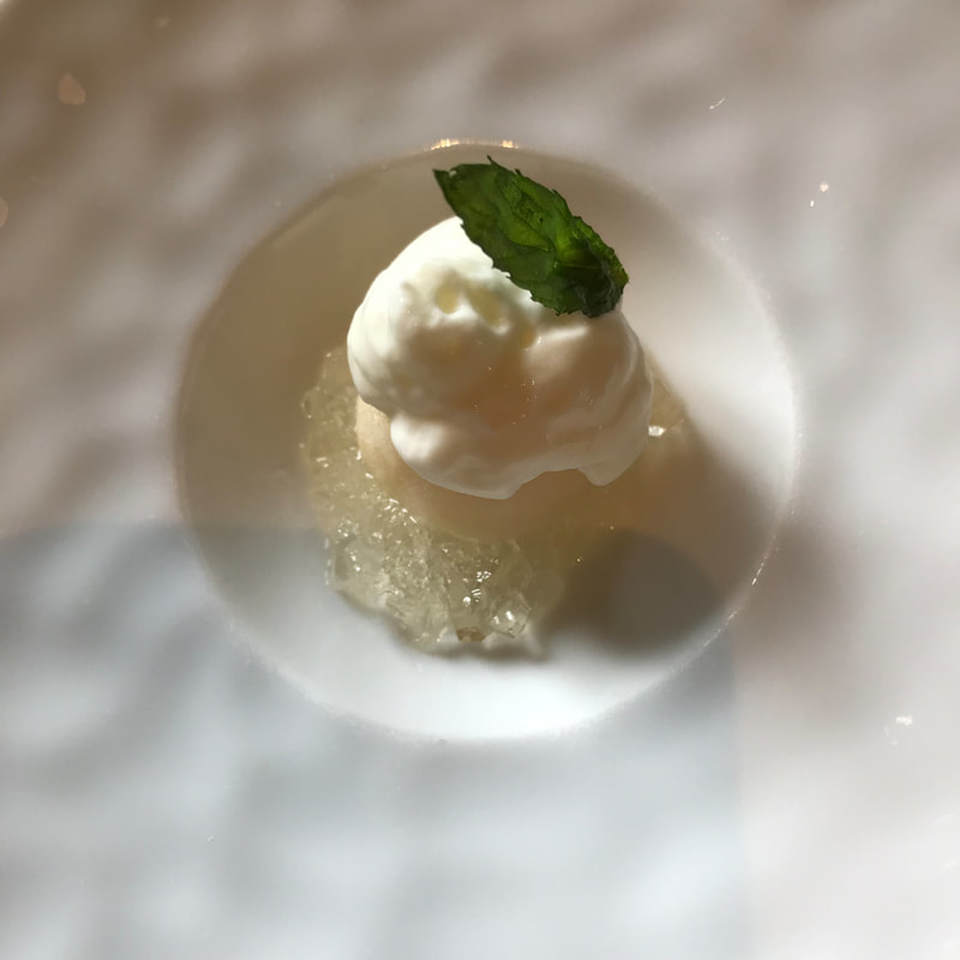 One certainly need this little Trou Normand sans alcool after such an amazing dish. Subtlety is its name here again... 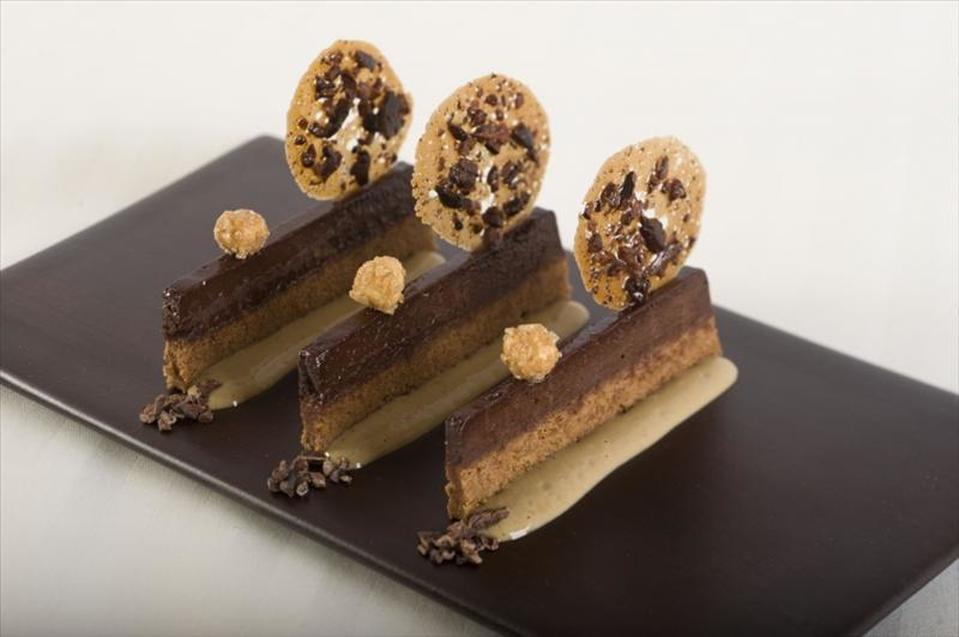 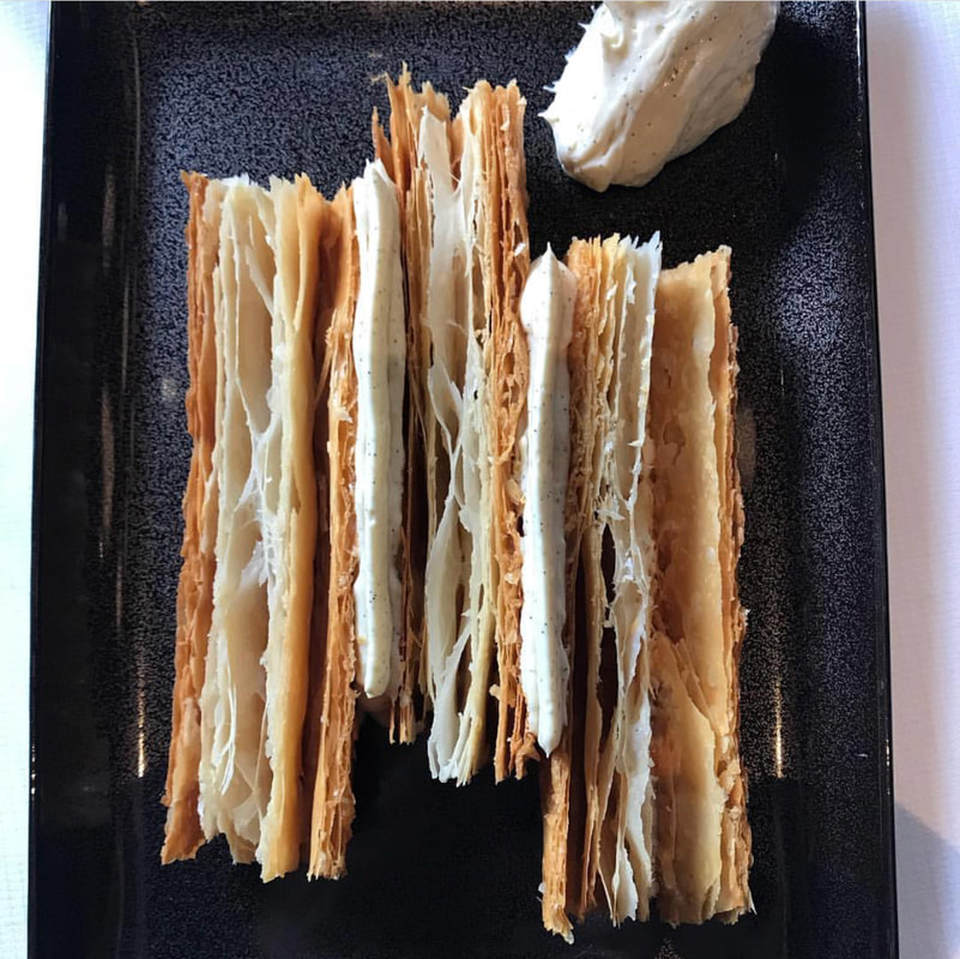 The real "Millefeuille" by Guy Savoy
I love a good Opera,but this time the millefeuille won... I never had such a light, croustillante pate feuilletée, period... " The lightness of Being" comes to mind and that hazelnut cream in between, je ne vous raconte pas!
And Hubert, the hilarious Maitre d' warns you it will be very noisy to eat, but nobody cares, all entranced in their own culinary paradise. He also takes advantage of your stunned look to elegantly slap a dollop of vanilla ice cream in the corner of your plate, then he let you choose mini versions of the other desserts to sample... 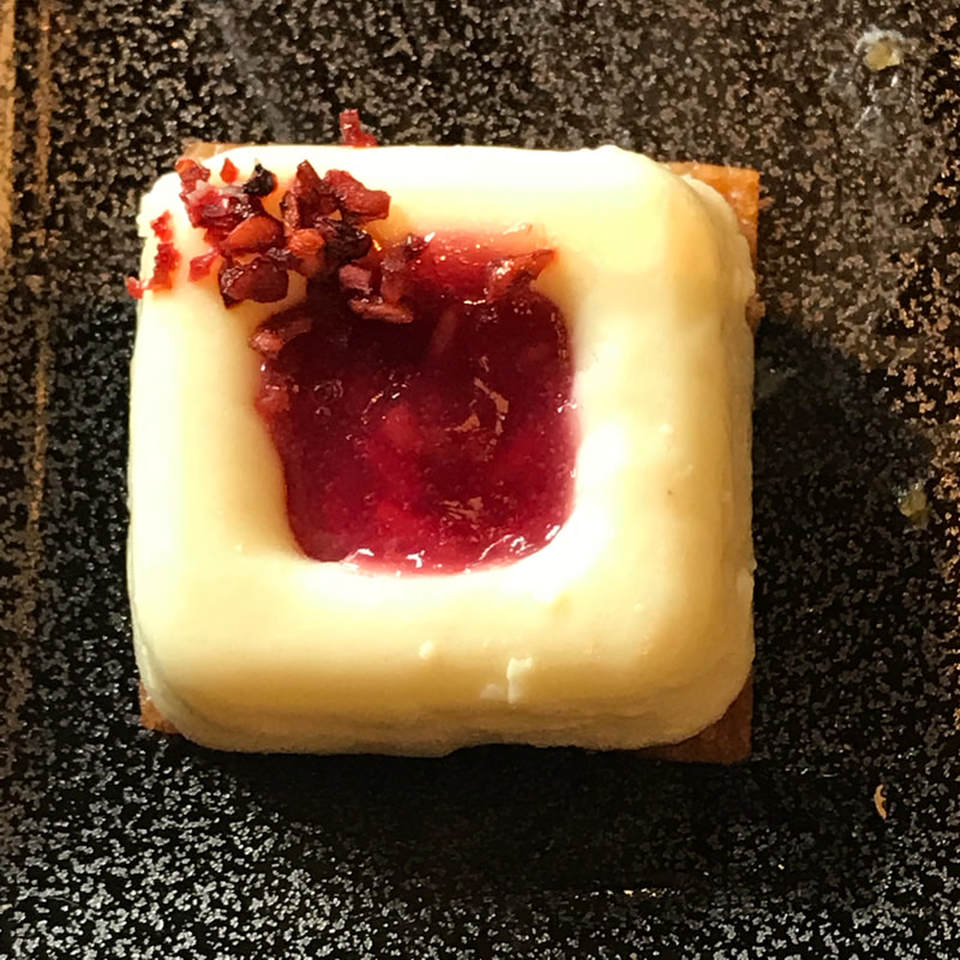 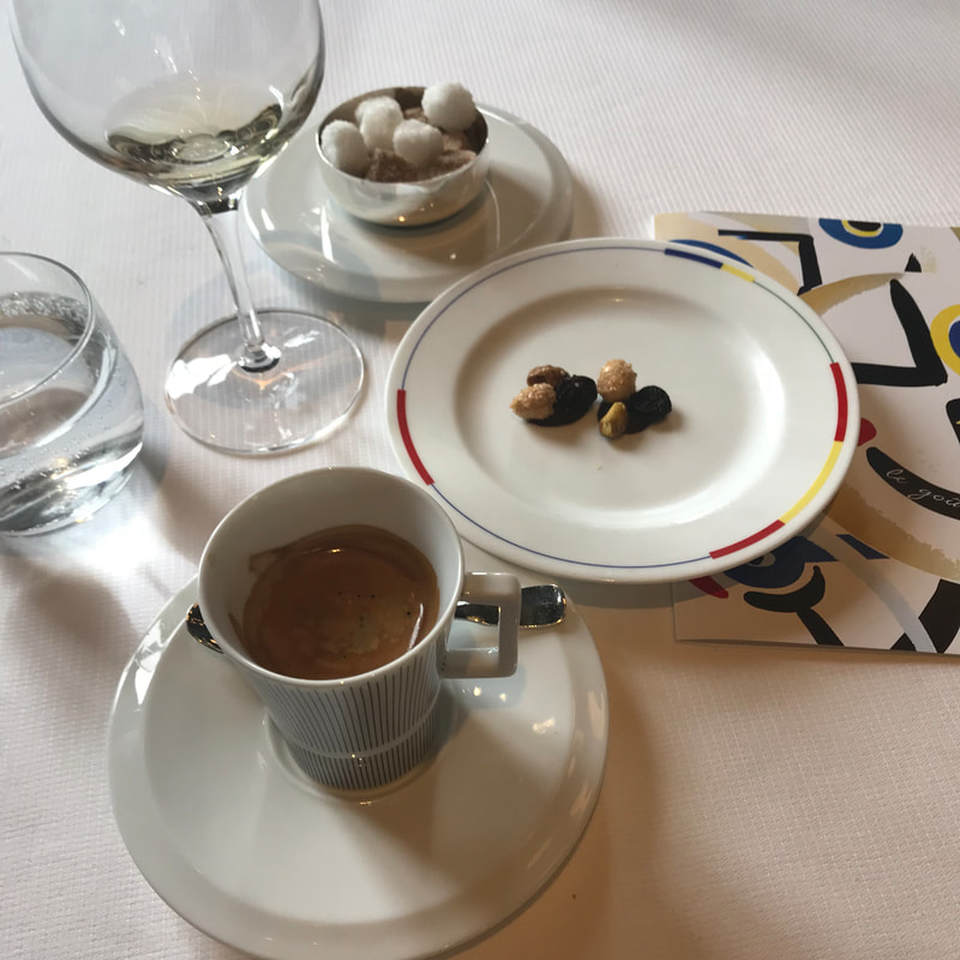 Trust me, you will need that coffee...
In conclusion, this is once more - see below - the best culinary experience i ever had. Not only the food is spectacular, but the venue, the service, the choice of wines by the glass, not to mention the main wine list and the overall calm that surrounds the whole exercise were second to none and extraordinary value for lunch!
Monsieur Guy Savoy, je vous remercie et j'espère que nous deux vivrons assez longtemps pour pouvoir revenir!

​And to help you out, I have saved for you the 2015 Press Release

My original review a couple of years ago

I have been lucky enough to go there twice, each time at somebody else expense to a point! And that's a story in itself:
The first time was the result of a sales competition at the European level when I was still working for HP France as a Product Marketing Manager.
One of our most unpopular product lines among our sales engineers was power supplies and related test systems.
The challenge was to get each country in Europe to compete for the highest growth of business within one fiscal year!
The winner PMM would be given a fairly high contribution to take him/her and significant other to a restaurant of their choice!
That in itself was a good enough incentive, but remember, I was not selling anything myself: I had to convince 40 strongly willed sales enginners to achieve this performance for me...
France won, and I got 1200 francs of bonus (in today's money, probably around 400 euros).
It was certainly not enough for as dinner for two at Guy Savoy, but I was more than happy to fork out (punt intended...) the difference! To quote a "Trip Advisor" review, "don't pay your mortgage for a month, but go and have a meal at Guy Savoy"! 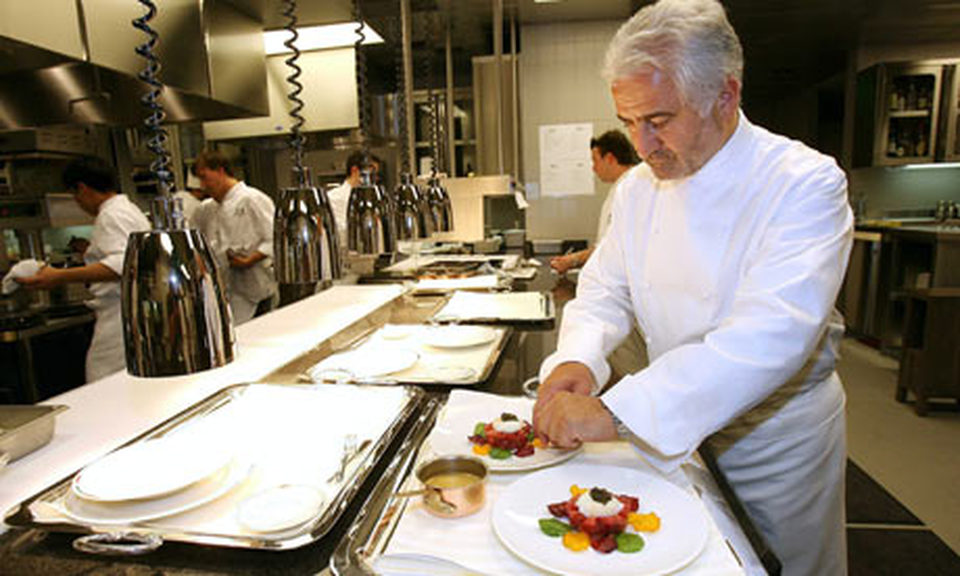 Guy Savoy is still "aux fourneaux"
The second time was not long after that. my wife had befriended a lady who was an air hostess for Air France, and she had met earlier a Scott who was at the time a very successful antique dealer in Edinburgh - so it was the Auld Alliance the other way around and a good deal of fun.
We had them home for dinner once and the next time he was in France, he wanted to return the favor, but had no place where or no intention to cook!
He had taken the Rolls-Royce all the way from Edinburgh to the French Riviera and was on his way back when they invited us to the now defunct Bistrot de Guy Savoy across the road from the main restaurant.
Fortunately, it was tiny and overflowing with clients, so he asked if they had space at the main restaurant, and by a twist of fate, they just had a cancellation for a table for four...
It was obviously as sensational as the previous time, and when he picked up the tab and paid for all of us, he said: "this is a lot cheaper that taking the Rolls around, so it is a very good deal!"
And this is coming from a Scott... 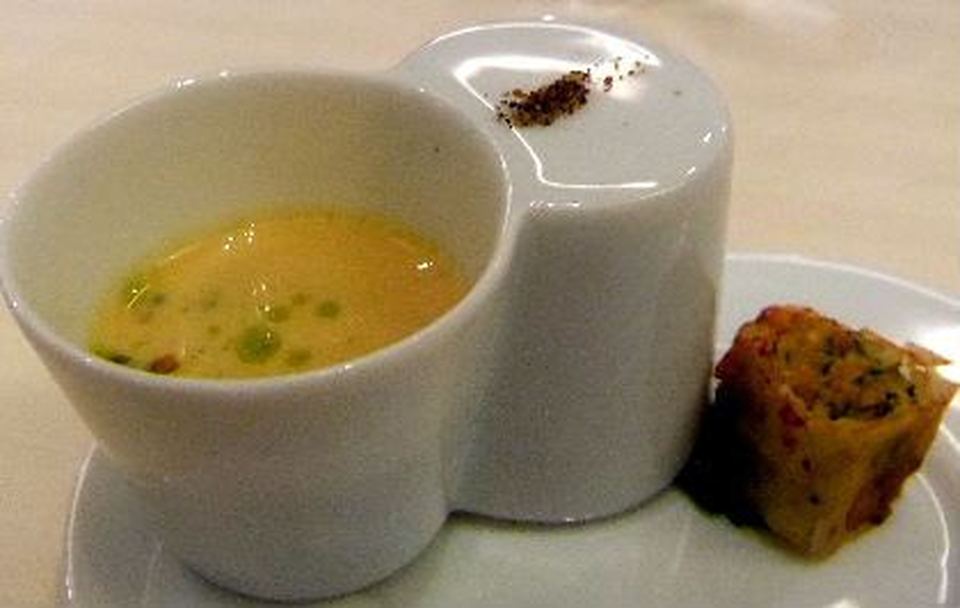 Guy Savoy - Amuse Bouche
Now, for the food:
Well, words are not enough to describe the experience, as the menu names the dishes in a minimalist fashion:

Although I have not tasted this particular dish, I am sure you would find the description well short of the range of sensations you would experience looking at it, smelling it, wondering where to get the first morsel from and then delicately tasting the first bite...and then let it sink into your aroused tastebuds. 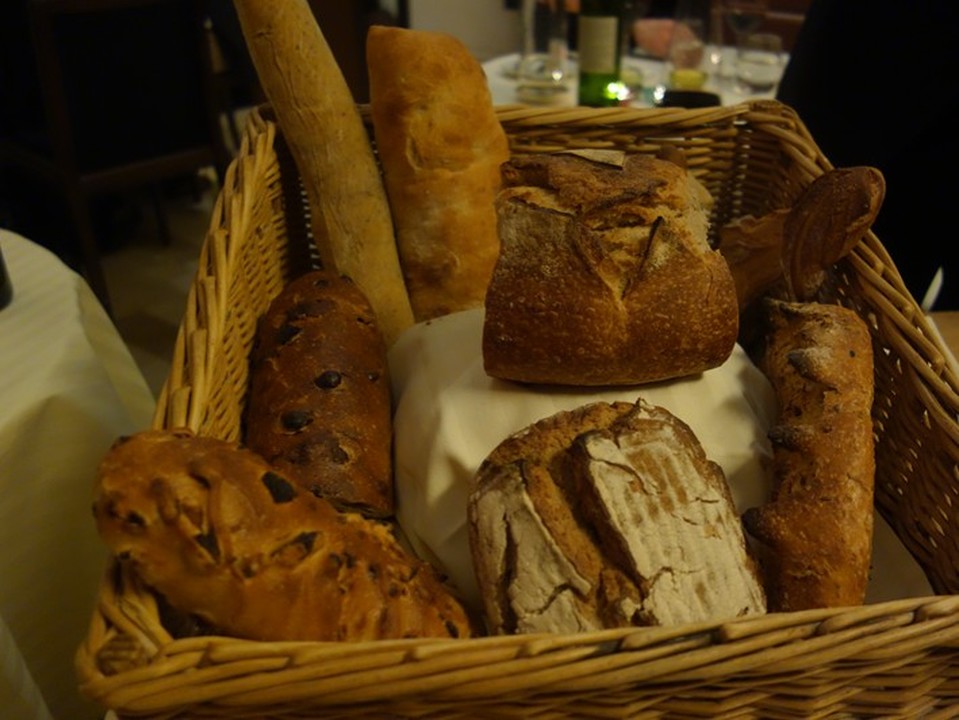 Guy Savoy - Le Pain
In the words of a culinary student in Paris, Christine (http://chezchristine.typepad.com/chez_christine/2006/06/guy_savoy.html)
"Guy Savoy loves surprises.  Whether it's being served an asparagus soup, then having the top lifted off the other half of the dish to reveal an asparagus mousse, or being served fish on a perforated plate that revealed a delectable broth underneath it in the bowl, I loved the combinations of textures and flavors."

One other surprise is the range of "amuse-bouche" served between courses. One that we still remember vividly 25 years later(!) was a cherry tomato into a light "concassee" of tomatoes underneath and a dash of the best olive oil ever, with a bitter sweet explosion of taste in one's mouth...
​So, don't pay the mortgage and go...once in your lifetime!