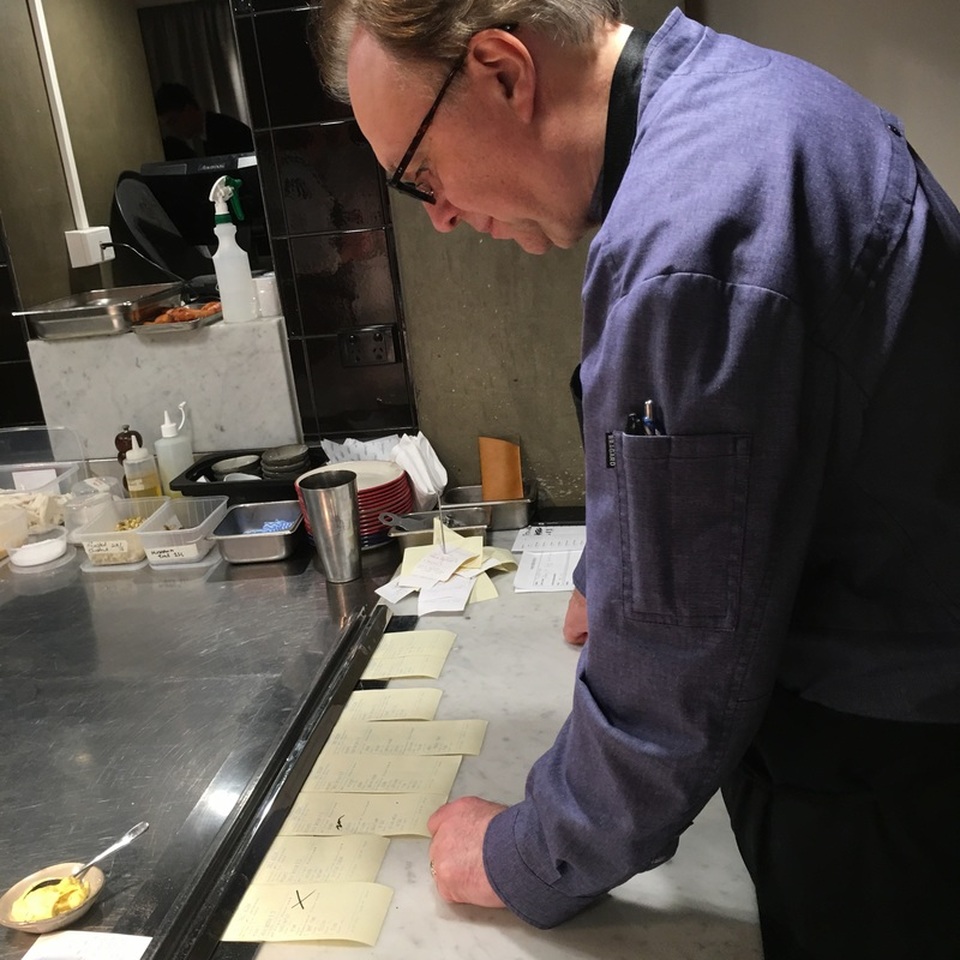 Philippe Mouchel checking dishes at the pass
Philippe trained with the great Paul Bocuse, the only chef in France to have been awarded three Michelin stars for more than 40 consecutive years. He was trusted to work at the first Bocuse restaurant in Japan, where he learnt to interpret formal French cooking for Japanese tastes and discovered Japanese food and flavours.
of I was lucky enough to be in Melbourne in the first week of Philippe Mouchel's new restaurant opening.
I had dined at one of his former ventures, PM 24, a few times and made friends as compatriots but also because Philippe' talents in the kitchen are a very serious affaire!
After a bit of a "traversée du désert", Philippe is back in the same little lane as CODA, George Parade (don't be fooled by the address in Collins Street which doesn't exist as such...) and in the basement space once occupied by the short lived Jamie's Fifteen. Elegant, without been ostentatious, the décor is inviting and comfortable and the kitchen opens into the space, (by Crosier Scott Architects ) so you can see all the action from the room, or if you are as addicted as I am, there are about four seats at the pass. They were already taken, so I will have to go back, and this will not be a punishment! In fact, I can't wait... 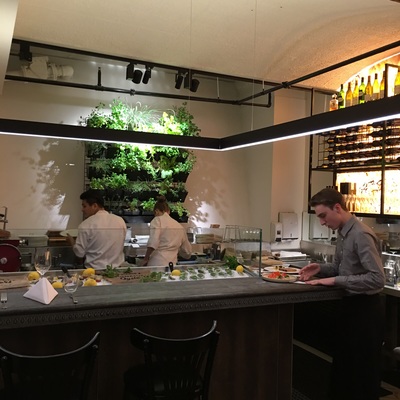 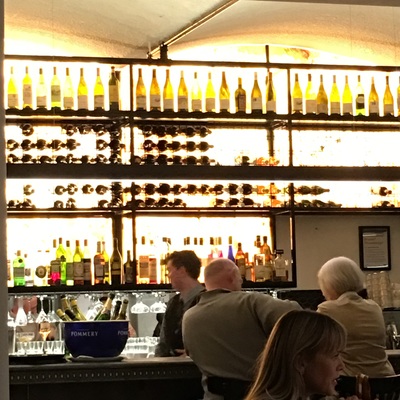 The long side of the bar chez Philippe 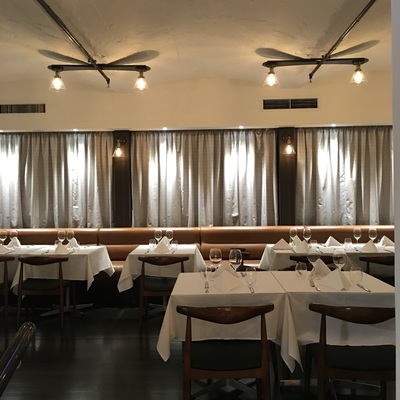 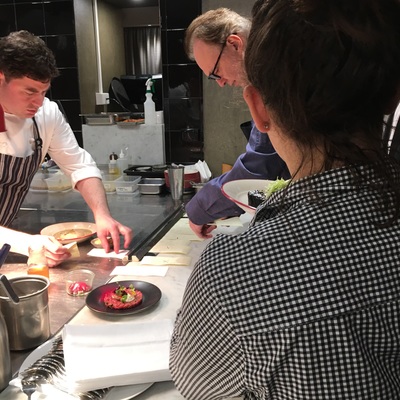 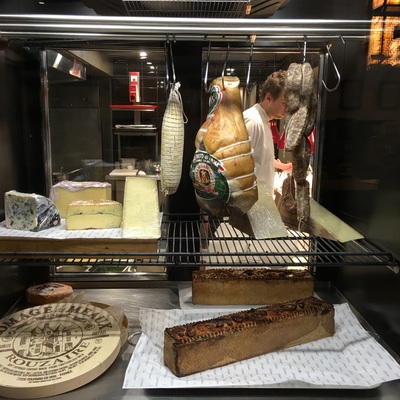 Fromages et charcuterie
I had a substantial lunch earlier that day and I was up since 5.00 am, so I was not going to indulge in the famous
"Bannockburn chicken Rôtissoire, mushrooms, potatoes, natural jus", which at the time was also infused with truffles under the skin. Instead I chose two entrées, one for its classic French nature, but with a twist and the other one for its sheer and audacious take on a very traditional French staple. But first some bread and butter!
And a glass of 2013 Marc Brédif “Classic” Vouvray from Loire Valley, a typical Chenin Blanc. 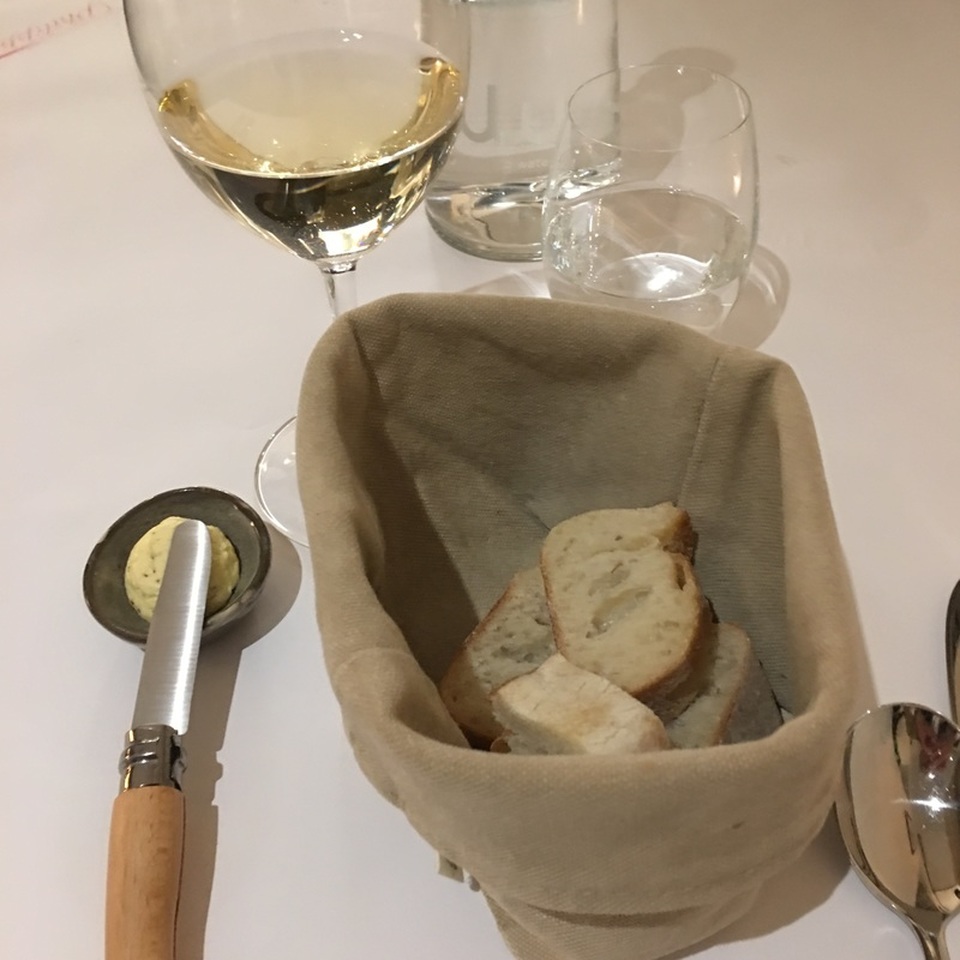 I had seen this dish on the pass, so I had to have it! Not only it is beautiful presented - and it was brought to my table by Philippe himself, what an honour! - but the textures, the crunchiness and sourness of the pickles and the flavours of the pâté itself were second to none, probably only matched by one made by Romeo Baudoin at the famous Sydney butcher Victor Churchill in Woollahra!. The acidity of the Vouvray was a perfect match! 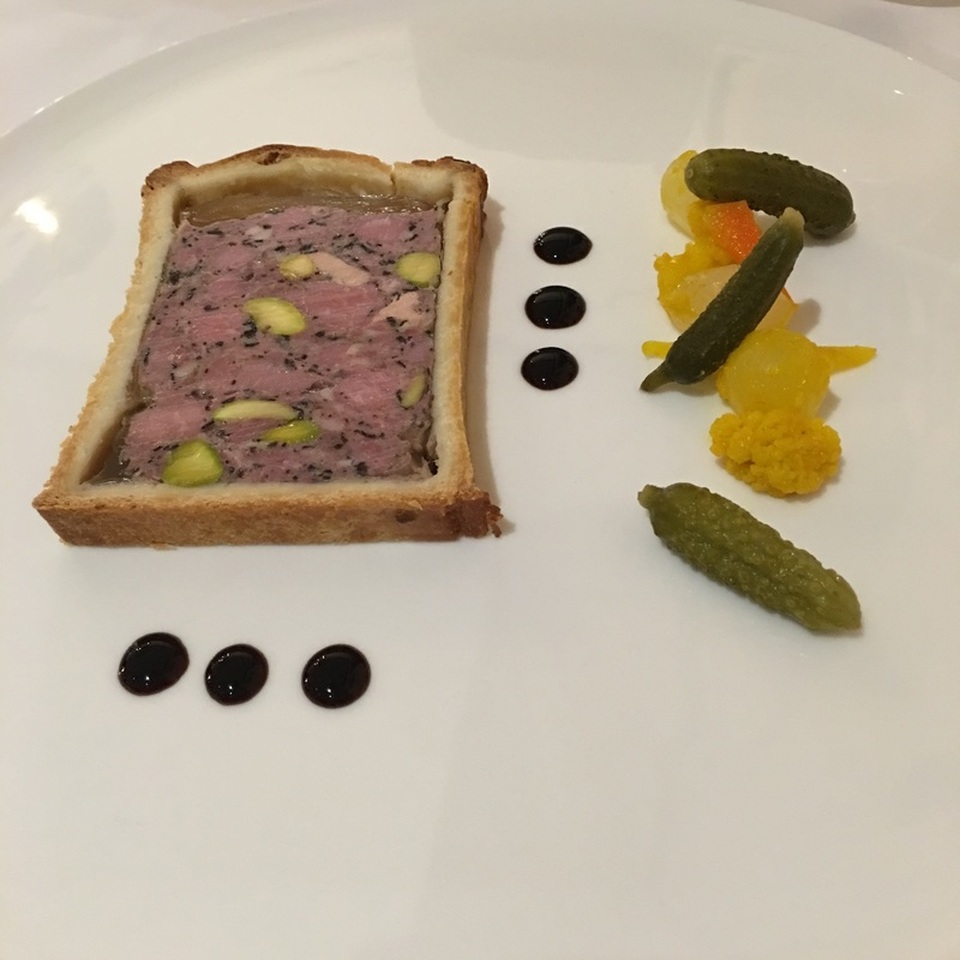 This is the prettiest and most adventurous steak tartare - filet américain,as our Belgian friends call it - i ever had!
And I have had many! I love a good steak tartare, one of the best I had was at Le Train Bleu about 15 years ago, but this one is inventive, colourful and just plain good! The idea of the lukewarm Borsch bouillon is a touch of genius and make the whole experience fabulously visual as the (French ) waiter pours it ceremoniously and excitingly original, as it brings a touch of saltiness and warmth to a typically cold dish, making it perfect as a main course. I matched it to a 2015 Moorooduc Estate pinot noir from the nearby Mornington Peninsula, one of my favourite wine region in Australia, famous for their Pinot Noir. I went with the recommendation of the sommelier and front of house ​Tim Sawyer, previously at Bella Vedere in the Yarra Valley. 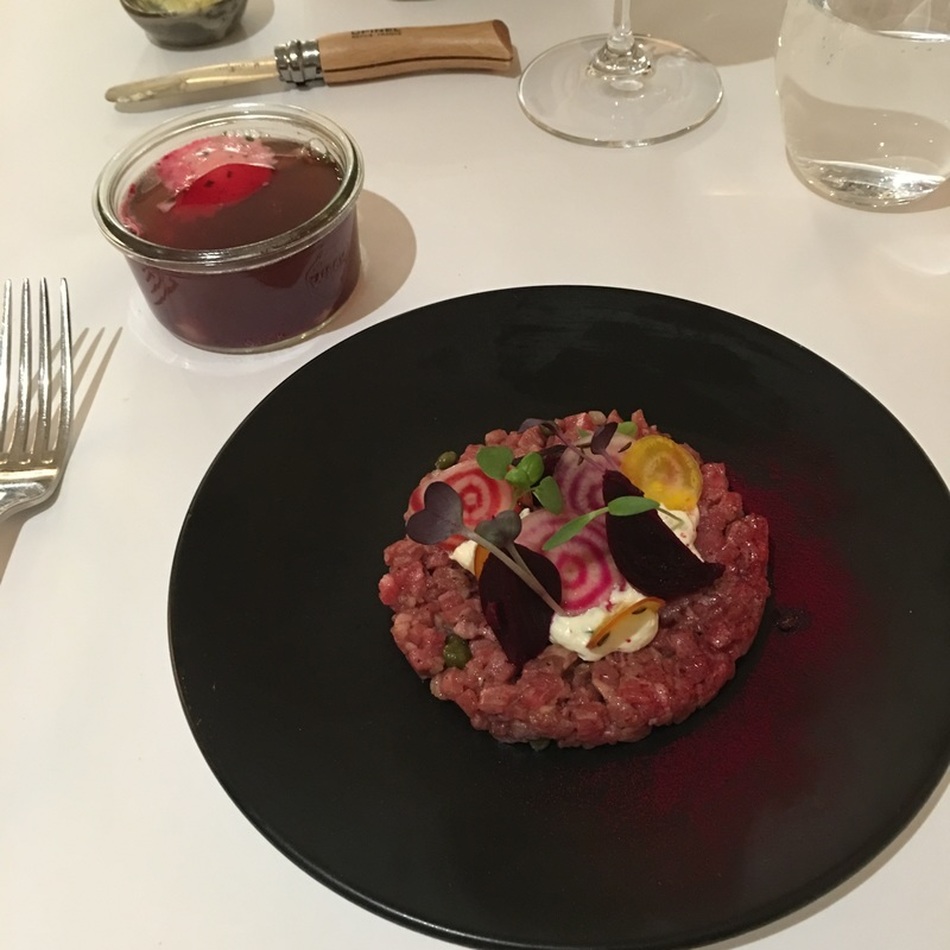 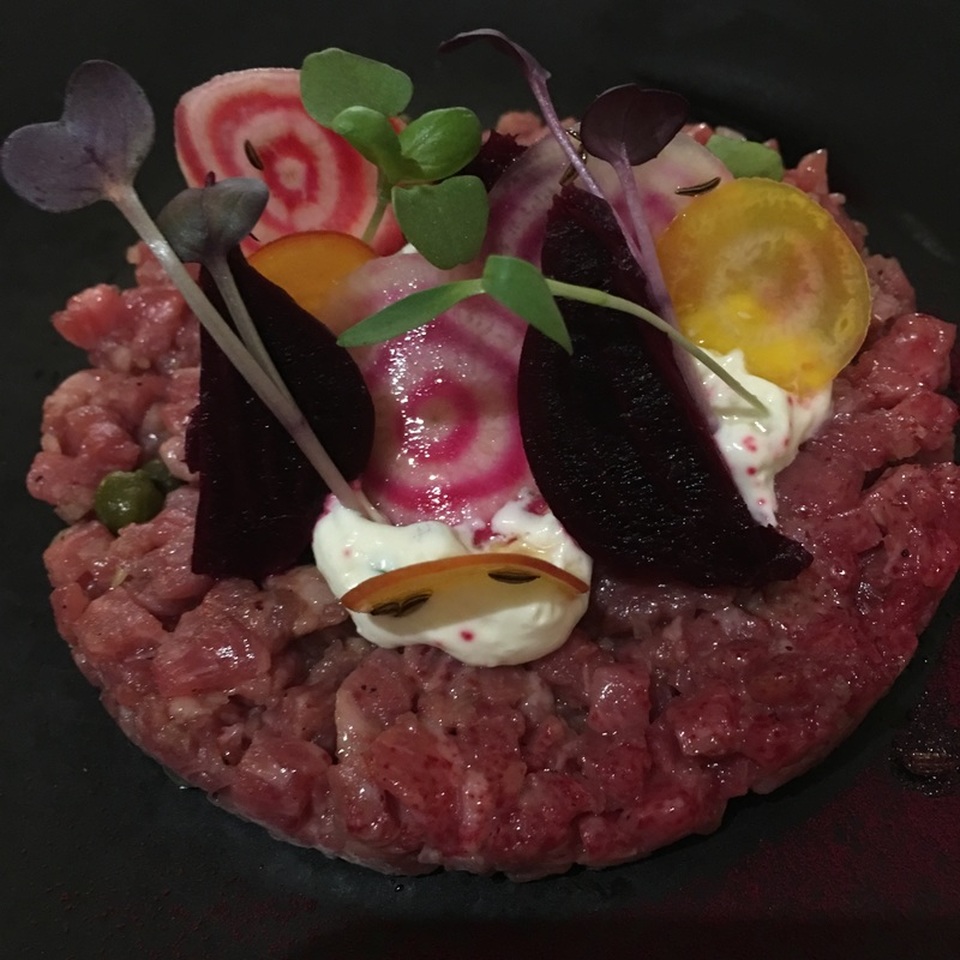 The final episode ofmy dinner was a bit of an indulgence I have to admit... But who can resist a good "Ile flottante" specially reinvented by Philippe Mouchel! There are two touches of genius here: one, the wafer thin, transparent caramel "tuile", far from the liquid industrial caramel sauce served in 90% of restaurants in France, and two, the hazelnut praline sauce carefully hidden inside the soft, fluffy and delicious meringue. Obviously, the crème anglaise is also "faire maison" and not from a "sachet" from Nestlé... A second glass of Pinot Noir was de rigueur, which gives you a chance to see it in the glass!
​ 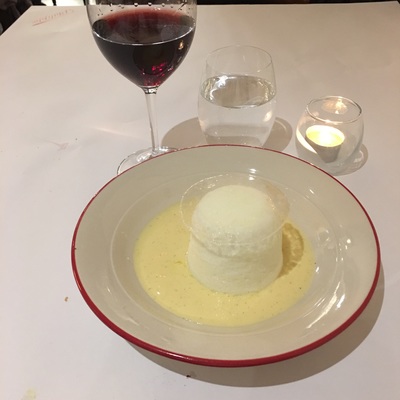 Another glass of Pinot Noir with the beautiful Ile Flottante 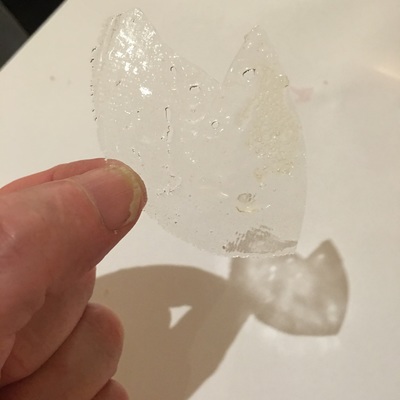 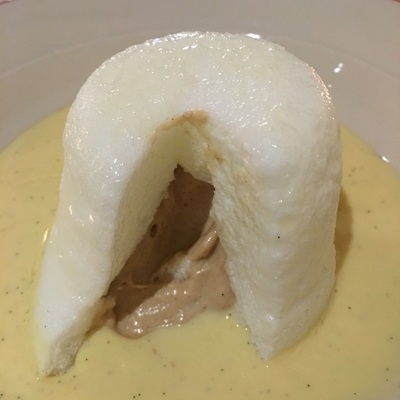 And the surprise hazelnut praline tucked inside the meringue!
In conclusion

Managing to create such a perfect meal in their first week of operation shows the craftsmanship of Philippe Mouchez and his team run by his talented Chef de Cuisine Aurélien Gransagne. This is matched by an efficient service by a crew of primarily French young waiters who do know their stuff. I had a great evening and will happily return and recommend it as the new go to French establishment in Melbourne!